Voluptuous German Amazon Nova Pink is thrilled about going to the Wrestling Woman World Championship in Florida. Nova is the best European wrestler and a lot of people are betting large sums of money for her victory. It is her first trip to the United States and she’s been invited to a welcome party by the local German community. Nova is wearing a black evening dress and her flat black strappy sandals tightly laced all over her legs. She’s getting ready in the bedroom and looks at herself in the mirror very proud and excited. While she is admiring herself in the mirror a masked man enters the room and overpowers and presses a rag over her face. Nova kicks and fights him, but he is much too strong and soon her world goes black and she is out on the floor. Nova awakens totally naked and horribly tied to a chair in an abandoned building. She is strong and muscular so her captors used many yards of rope to keep her completely immobilized massively bound arms and legs and her body tied to the chair. Her elbows are crushed together and there are lots of ropes from her ankles to the tops of her thighs. Nova cries in despair and shakes her body uselessly causing the ropes to dig into her flesh and cause more pain. A masked man is sitting next to her and he explains that mafia doesn’t want her to win the championship. Nova cries desperately her arms and legs are completely numb and she’s afraid she’ll lose sensitivity and no longer be able to wrestle. The masked man doesn’t care at all. Nova curses him in her native tongue and spits at him. After some time taunting her, he becomes bored and shoves a large ballgag into the German woman’s mouth sealing it off with many layers of duct tape. He watches as she screams through her gag and moans and cries. Then he applies clover nipple clamps to her tits and torments her with a shocking machine just for his sadistic amusement. He leaves the helpless wrestler brutally bound and thoroughly gagged while he goes off. Three days have gone and the German girl is now naked and horribly hogtied on a dirty mattress. She is massively gagged with duct tape and her wrists and ankles are completely fused together. Her captor is my husband and now he sends me to watch her. I enter and tease and manhandle her groping her gorgeous body and sucking her tits. I rub her pussy and mock her wrapping my legs over her brutally bound body. Poor helpless Nova is little by little losing her strength and willingness to fight – at first she seems resigned to her unknown fate but then she gets a burst of energy and tries hard to struggle away from me but she is too brutally bound to do anything to stop me. I soon tire of this and leave her horribly bound and gagged. My partner returns and ties up her big tits with tourniquet bondage making them bulge. Poor Nova looks around her prison to find that she’s now all alone and her fear begins to escalate. She is so afraid to be left here abandoned and her efforts to get free are useless. She shakes and sobs desperately… 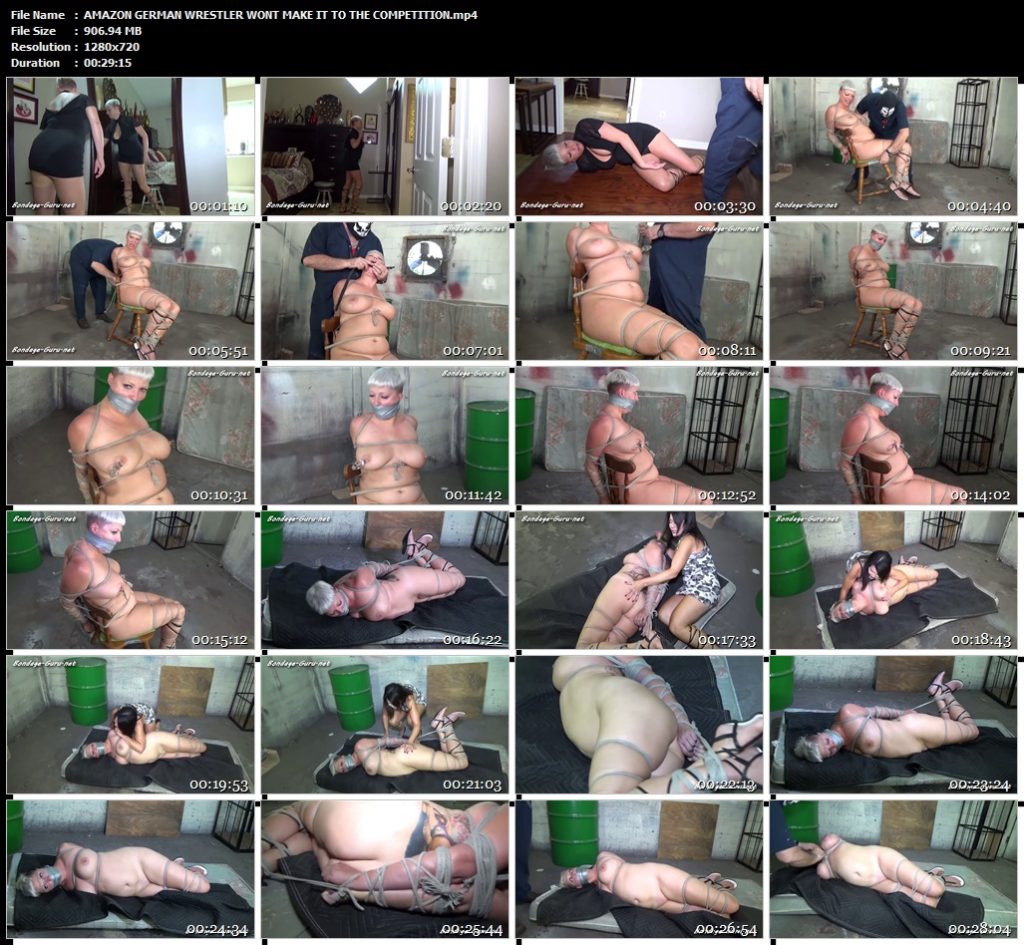