Cinched and Secured – Ariel Anderssen – How Can I Ever Repay You?

Ariel has been through quite an ordeal! Snatched by a crazed man while she was out for her morning ride, she soon found herself bound and gagged and terrified as she was to be held in exchange for a tidy sum from her wealthy father! She pleads desperately and tries to reason with her captor but is gagged again and again by the sick creep, and finally left hogtied while he rushes off to collect the loot from her old man. Of course, he doesn’t leave her alone: She has a nice ticking time bomb keeping her company! The beautiful Brit screams in terror, fighting like mad to escape the ropes, her jodhpurs clinging tightly to her magnificent bottom, and just in the nick of time, a policeman finds the poor girl! Stopping the bomb, he frees Ariel who is so grateful, she vows to do absolutely anything to repay the officer. Funnily enough, he has an idea or two about that! 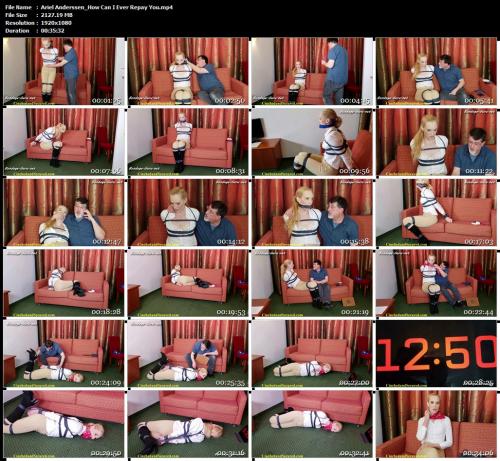