Detective Chrissy is working undercover at a sketchy strip club downtown, trying to catch a guy who has reportedly been soliciting a few of the girls for sex among other strange things. She is successful at luring him back to her apartment. When he arrives, she asks to see the money, that way she will have the evidence she will need later to convict him. Then she pulls out the handcuffs and tells him to turn around and put his hands behind his back. He thinks she is getting kinky, but it’s all a cover, what Chrissy doesn’t know is he was suspicious of her all along so he is prepared! She admits she is working undercover and he has the right to remain silent, but in the blink of an eye, he snatches the cuffs right out of her hands! She barely knows what to say, and tries to intimidate him telling him she has tons of backup, but he tells her that he already had them taken care of! He forces he down onto her knees and cuffs her hands behind her back while checking out her ass and high heels. Chrissy is still talking back so he slaps a few strips of duct tape tightly over her mouth to shut her up!

For his next surprise, he pulls out zip ties and starts tightly binding Chrissy’s already cuffed wrists, elbows and legs until she can barely move anymore. He’s sure she won’t be able to escape and report him now! Just for fun before he leaves, he strips Chrissy topless and zip ties one of her tits. Then he fondles and gropes her as she squirms and mmpphs in protest. Now it’s time for him to get out of there so he leaves her there struggling and certain she won’t get free. However, Chrissy is a trained detective and she isn’t going to give up yet! She struggles as hard as she can, but with every move the zip ties painfully cut into her skin. Her elbow tie eventually comes off but the rest are far to strong for her to break them, so she goes to plan B, and realizes that she could possible slip a hand out of her cuffs! She struggles and almost gives up but it just barely fits and she manages to free a hand, but turns out thats all! She slips off her heels and pulls at the zip ties but they are just too tight! She realizes she has to try and escape as is, so she removes her gag and hops her way to the door to go find help! 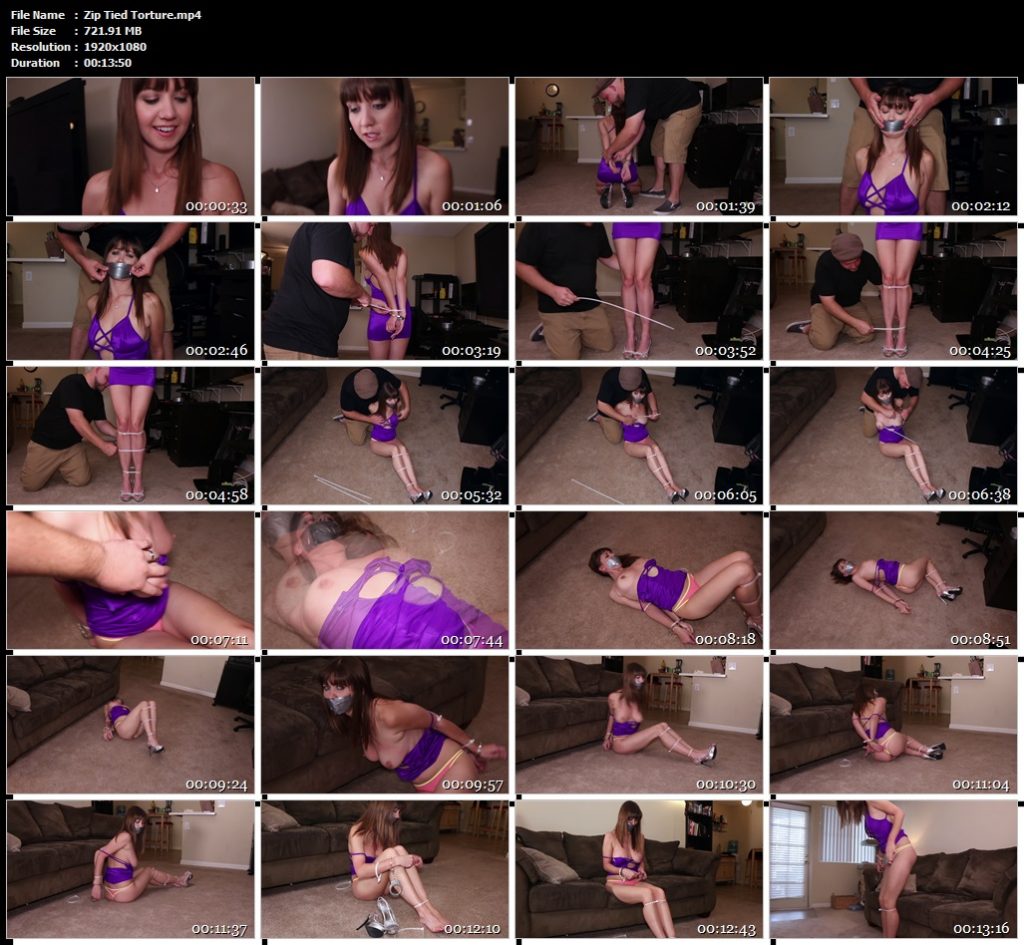