He is in his hotel room all alone when in walks AJ, Having known AJ for a long time, he knows that she is constantly flirting with him because it seems she is into older men. But he wants no part of her since she is the daughter of an old high school friend who happens to be staying the room next door. Today AJ is wearing some very revealing clothing. She tells the man that her parents are down stairs and will be there for a long time. Then she goes on to tell him about a baby sitting job she recently had. She explains that the boys she was watching tied her up. But that they really did not do a good job and she was able to escape rather easily. The man tells her that she is lucky. Because if he tied her up, she would never get loose. This excites AJ and she challenges him. “Tie me up! I bet you I can get loose!” Although he is reluctant, the man accepts the challenge. But instead of tying her with rope, he brings out a roll of tape and starts to wrap her up good and tight. AJ protests by telling him that he was suppose to use rope so she could try to reach the knots. But after a while, she is way too turned on to care. Then when the man stuffs panties and tapes them in her mouth to gag her, AJ can hardly control herself. “Hurry pull my pantyhose down and let me have it!” she says through the tight gag. But the man has no clue what she is trying to say. All of the sudden, the phone rings and it is AJ’s mother who tells him that AJ has run off somewhere and wants him to help her find her. With AJ there whimpering bound and gagged, the man tells the mother that he has not seen AJ but that he will be right down to help her find her daughter. ( Well, at least to pretend to look for her). AJ is a bit disappointed that she is going to have to wait a little while longer to get what she wants. But being taped up so tight has her very turned on and she will soon find out what a bound orgasm feels like as she waits for the real thing. 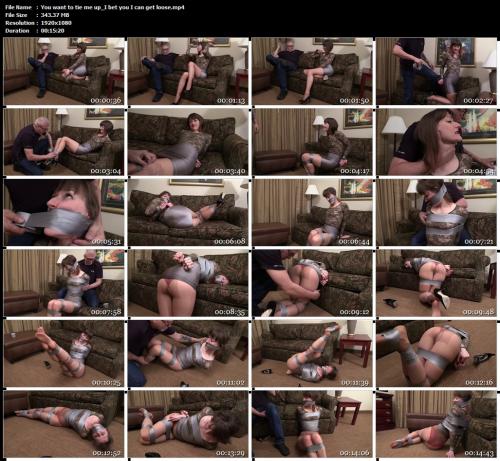