You have me tied up and gagged! Now you better pull my panties down and fuck me! – Girl Next Door Bondage

He was taking a nap in his hotel room when he was suddenly waken by Carmen. Carmen was the wife of a co worker who somehow found a way into his room. She told him that she was also at the hotel with her husband. But she was bored because her husband paid little attention to her. She told him that she came to his room because she wanted to play something naughty with him. A short time later, the man had Carmen tied up. She told that being tied like this wasn’t going to stop her from getting her way. So to shut her up, he stuffed and taped a gag in her mouth. Left to struggle bound and gagged, Carmen was still very horny and found a way to get her skirt up. When he hogtied her, she continued to beg him through the gag to pull her panties down and fuck her. Eventually Carmen got her way. But later as she laid on the floor tied up with her panties down, she let him know that she was ready for him to do her again. 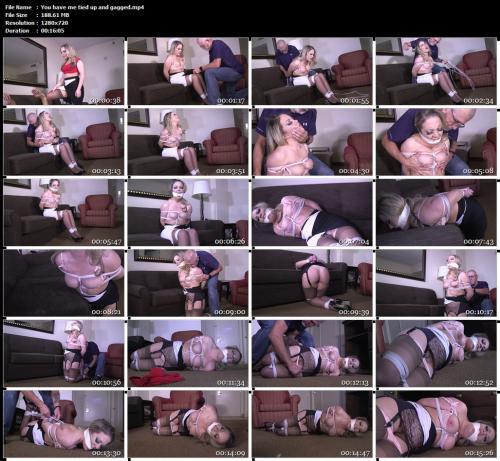