How did poor Yoko get here? It doesn’t matter. What matters is that she’s never going to leave! Bound and gagged, she mewls and struggles as her mysterious captor slowly goes through the contents of her purse, taking her phone, her cash and her car keys. As he calmly explains to the terrified Asian beauty, she no longer has any use for them. She’s to remain an unwilling guest here for the rest of her life, as he rents her out as a bondage plaything to various unsavory sorts. No matter how much she shrinks away from the crazy man’s touch, her bindings make it impossible to evade his grasp as he continually pulls her back to whatever position suits his fancy! She feels so vulnerable, wearing only bra, panties and pantyhose. Her modesty is only just preserved, but she knows he can change that with the most minimum of effort. As she fights for freedom, she knows her luscious ass is on display and fueling his perverted fantasies, but she doesn’t care. She only wants to escape, but the sobbing sounds she makes into her ball gag betray her knowledge that it is an impossible task. Placed into a tight hogtie, her already limited freedom is severely curtailed, and she’ll be stuck in that position, unable to move away while the crazed man prepares her for her sleeping arrangements! Soon the poor girl finds herself bound to an iron stand, her arms pulled high up behind her and her legs spread far apart and anchored to either side of the metal structure. The strain on her muscles is almost unbearable, but she has no choice to endure, the muscles in her arms and legs trembling as she hangs helplessly, pulling and tugging against her restraints, but it’s no use. She knows she is merely an object to be displayed and used, and she can only wait in terror to find out just what uses he has in mind! 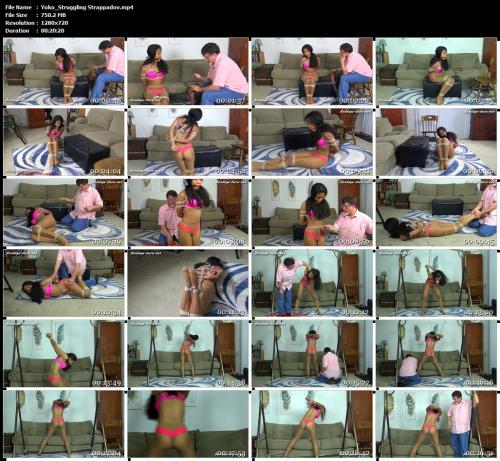