Beautiful Asian girl Yoko has been held for ransom, and she’s in a real bind – literally! Her wrists and ankles tied, mouth plugged with a ball-gag, she’s forced to hop into the room, thanks to a tight crotch rope, one end of which is clutched in her captor’s hand and used to pull the unwilling girl into his lair! She’s forced to the floor and tied with her legs extended and anchored to the furniture, her wrists tied behind her and also anchored. Pulling on the wrists makes the crotch rope dig even deeper, but that does not stop the girl from struggling like mad, tipping herself over and forcing her to pull even tighter on the rope buried against her sex. The good news is her father will meet her’s demands. The bad news is she’s to be placed in a very strict hogtie to ensure she can’t escape before her captor collects the ransom money!! Left alone to squirm and thrash, she can only hope the captor is as good as his word and she will soon be reunited with her family!! 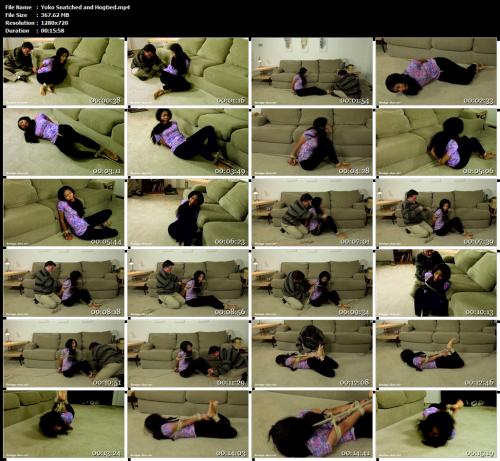 Cinched and Secured – The Wages of Sin – Part 3