Chrissy is a sexy yoga teacher and one of her students has become obsessed with having her all to himself. Today he waited after class and when everyone else had left he made his move, knocking her out to keep her subdued until he could get her back to his place. They don’t have far to go and when they arrive she is still out. The scene begins as he cradle carries her limp body inside and gets to work securing her with duct tape, just in case she tries to put up a fight when she wakes up. He duct tapes her wrists crossed behind her back and tapes her ankles. As he finishes taping her knees she starts to come to, confused and afraid, she immediately starts pleading with the man to let her go! He quickly quiets her by gagging her with a few strips of duct tape over her mouth and leaves her while he takes care of some business. She struggles desperately to break free from the duct tape but is ultimately unsuccessful. He later returns to play with her some more, teasing and tormenting his helpless captive. He pulls down her yoga pants and gropes her, and when she tries to get away, he gives her a few hard smacks on the ass as punishment! Then he pulls up her top and fondles her some more. He is suddenly interrupted by a phone call and leaves her struggling helplessly yet again, this time with her pants pulled down and tits exposed! When he returns he decides that they will have even more fun in the bedroom, so he picks her up and carries her over his shoulder to take her upstairs! 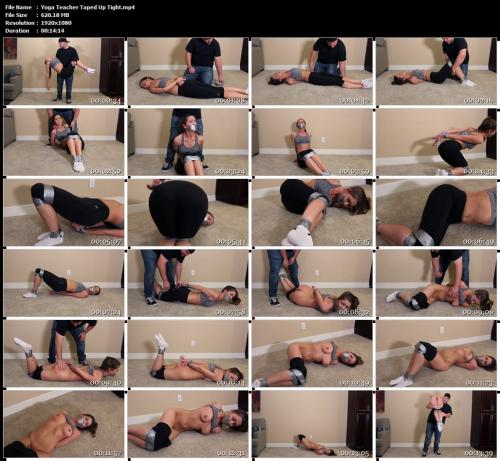