Chrissy was out on a run when she suddenly realized someone was following her! She tried to run faster to get home but she was already too tired and he caught up to her! He knocked her out with a blow to the head, stripped her down to nothing but her ankle socks and her taped her just enough to secure her for now while she takes a nice ride in his trunk! He brought her back to his hideout where he left her to sleep it off while he notified his boss of the new merchandise.

Part one begins as she wakes up and groggily moans at her throbbing headache. She starts to notice that she can barely move her arms since they are pinned down with duct tape! Then she starts to remember being followed while she was running, and realizes she must be in imminent danger. She struggles against the bonds but she is far too late, he has already heard her wake up. The man enters the room armed with a white cloth to silence her distressed pleas. He pulls it tightly between her teeth, cleave gagging her as she goes wide eyed in shock and confusion. She has no idea what he wants from her! Next he shows two rolls of tape and she doesn’t understand, he already taped her up! She begs for him please don’t me up more! If only she knew what he has in store for her!

Starting from her ankles her wraps the sticky tape around every bare inch of her naked body and she really starts to panic now. She begs him to stop, he is really starting to scare her! He sure as well can’t do that, today is shipping day and he needs to make sure she is secured in the most efficient and compact way for transit to her new owner! She can’t believe her ears when he breaks the news to her. Half frustrated and half fearful, she wiggles and whimpers while trying to maintain her balance until she is fully mummified from her neck to her ankles! Her puts her the floor and we see that she really can barely wiggle or move at all! He tells her shipping is in 30 minutes and leaves her to struggle, but she cries out for him not to leave her like this! She ends up being too loud so he comes back and decides he needs to tape her mouth shut over her cleave gag. Once she is quite efficiently double gagged he leaves her to struggle yet again while he makes sure plans are in order. She has never felt so constrained! She is so desperate to find a way out but the only thing she manages to make it out of is her socks! Now barefoot her soles wrinkle as she fights against the tightly wrapped tape, soon realizing that she won’t possibly escape! She mmmppphhs and struggles in peril waiting for her inevitable fate!

In part two, the masked man returns and tells her that it turns out that the boss doesn’t want her taped up after all, instead her wants her plastic wrapped! So now he will unfortunately have to remove all that sticky tape from her delicate bare skin! He start to remove it from her legs and works his way up as she grunts, whimpers and eventually cries in agony as he rips it off her sensitive nipples. He finishes removing the tape from her front side then tells her to do the rest herself. She slowly peels it off her back and cringes in pain as she attempts the worst part, removing it from her sensitive back legs. We see the red stripes along her skin where she was wrapped up very tight. It’s clear based off the redness of her skin just how sticky and difficult this tape was to remove. As she is peeling off her gag he grabs her by the arm and drags her out before she can even think that she is free! 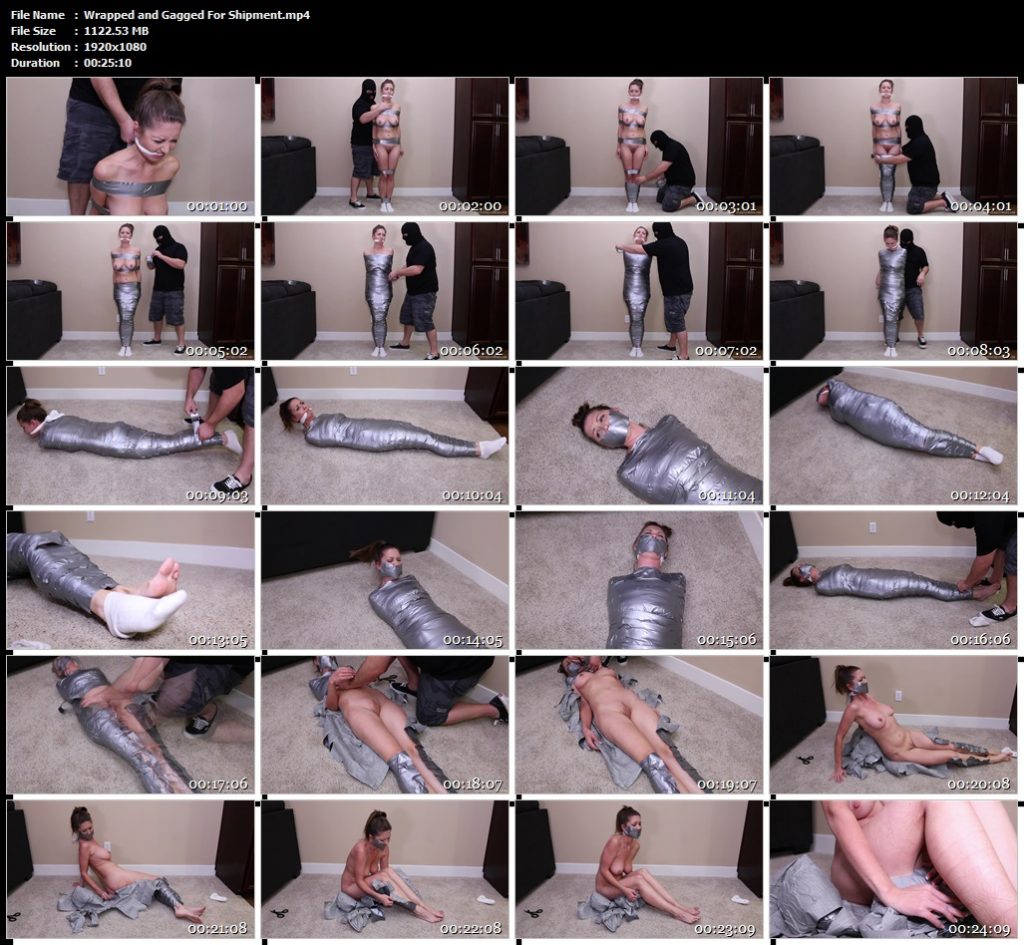