Dakkota and Joanna are two ace investigative reporters hot on the trail of a story. They’ve come to a deserted warehouse late at night to gather evidence on a nefarious white slavery ring. Unfortunately for them, the place isn’t as deserted as they thought. Caught by surprise, Dakkota is forced to bind Joanna with duct tape, and then forced to suffer the same treatment at the hands of their assailant. Since they don’t want to tell him why they are here, he stuffs their mouths with ball gags and leaves them to struggle. Seems the assailant knows exactly why they are there, and is only all too happy to help them learn all about the white slavery business – as product! He tears their blouses open and forces them into tape hogties, leaving them to roll around on the filthy floor until he can return and introduce them to stage two of the business!! Soon, while waiting for prospective buyers to bid on them, the poor girls find themselves strung up in severe strappados, mere pieces of meat on display for the hungry clientele. Mouths stuffed full of old panties which have been sealed in place by microfoam tape wrapped savagely around their heads, the helpless victims can only mewl and moan as they hang in suffering silence. They desperately want to be released from the tie, but they fear what’s next in store for them, but they haven’t long to wait. The girls have finally reached the end of the line: a buyer has finally been found….for one of them! The other is to be disposed of once and for all. As the mummified girls struggle, they wonder who will be sold and who will meet their demise. They know escape from their cocoons is impossible, and so they whimper helplessly as they are wheeled through the deserted warehouse on the way to their successive fates. Poor Joanna is on her way overseas to become a sex slave, while Dakkota is taped to a pole, unable to move even a finger to help her partner. She watches helplessly as the poor young girl is wheeled away, sobbing into her gag. Now Dakkota is left alone, waiting for the end. The crazed tormentor has scheduled the building for demolition, and Dakkota can only wiggle and squirm helplessly as she counts down the seconds to the explosion that will mean her doom! 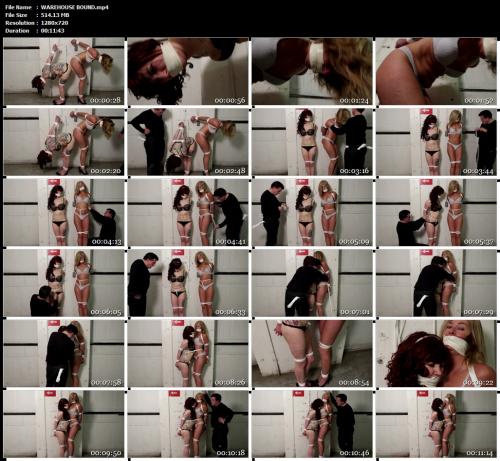