Gorgeous blonde Whitney Morgan has been invited to an elegant party and is getting ready for it selecting the perfect dress and high heels. She is proud and excited about her beauty and sexy attire as she parades in front of the mirror admiring herself. Before going out, Whitney sits in the living room convinced that no one hears her and in a low voice makes a phone call to an unknown person. But Jim Hunter is standing behind the door listening and discovers that Whitney is a member of an organization of hackers paid by a foreign entity that is trying to steal government and military data. When the call is over, Jim ambushes her from behind pressing a wet rag over her face. Whitney kicks and struggles but soon she is put to sleep. Whitney wakes up stripped down to her thong brutally tied to a chair in an abandoned building. Her arms are tightly bound with miles of ropes from the elbows to the wrists. Her legs are tied to a leg of the chair, with her ankles crossed and lot of ropes binds her legs up to her thighs. Other ropes tighten her chest and keep her body well secured to the chair. She is also gagged with several layers of tape that surround her face. Whitney, alone and abandoned, struggles in vain for hours moaning and crying. After a long time, Jim comes and asks to reveal the names of her boss. She shakes her head desperately to show that she knows nothing about this. Jim grabs her tits and applies some painful nipple clamps and then nipple suckers and he begins to zap her with a taser. After a while Whitney faints. He comes back many hours later and wakes Whitney by throwing water in her face but stubbornly she still tries to say she doesn’t know anything. Jim removes the gag and forces a large ring gag between her teeth. When evening comes he removes her from the chair and puts her onto a mattress fusing her ankles to her wrists in a very tight brutal arched hogtie. He leaves the helpless woman struggling on the mattress for a long night giving her time to decide it’s better to give the information he wants. Next morning he comes back. Whitney is a complete dirty mess but shakes her head to say no. Jim lays beside her manhandling her and warning the curvy woman to comply but still she refuses. He takes the taser again and shocks her a lot of times causing her to sway back and forth. He beats her ass until she finally relents and gives the names of her boss and the location of his company. Jim leaves the poor woman painfully hogtied totally destroyed and shattered … 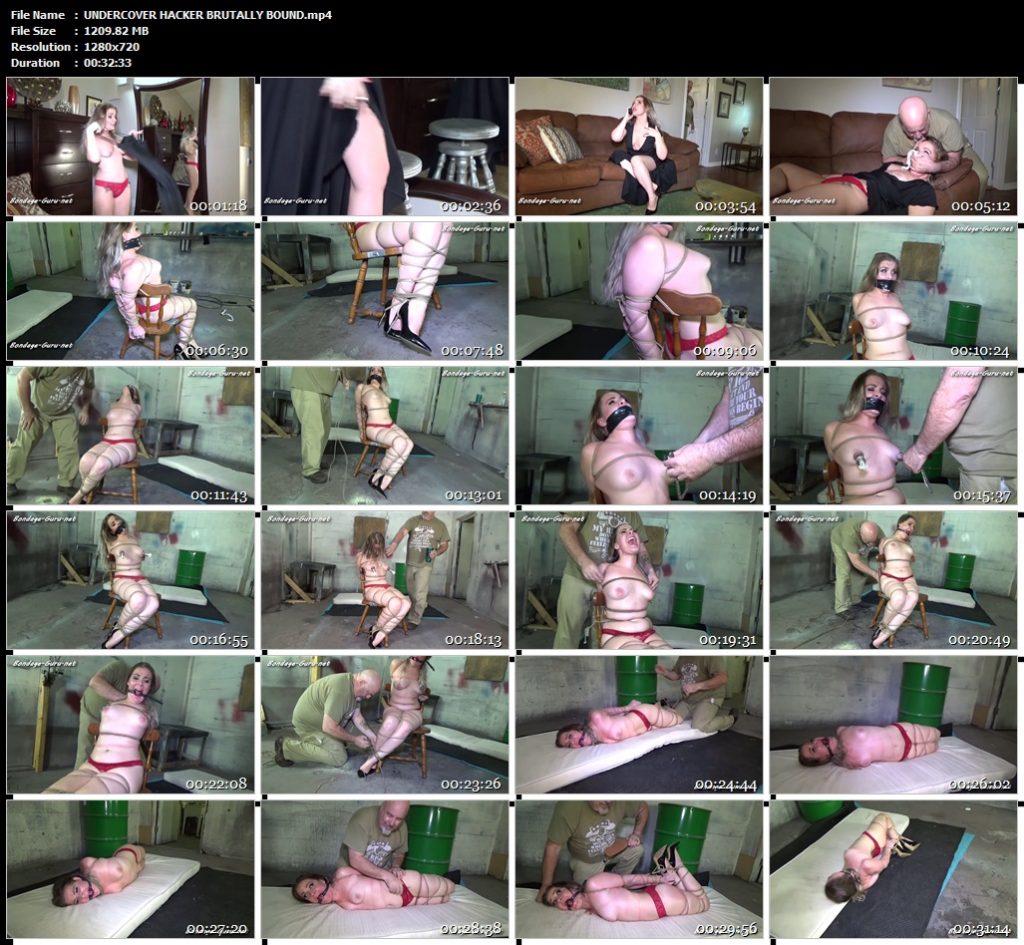