The scene opens up with Chrissy on the phone with her partner. They are working to catch a serial burglar who has been robbing women in the area and tying them up with purple stockings. She informs him she is the cop being used as bait and that he just needs to wait for her signal. Later we see her crossing her legs in her high heels and stockings as she checks messages on her phone. She doesn’t notice the masked burglar sneak in and he quickly grabs her. She tells him she’s a cop but he doesn’t care and ties her wrists with a purple stocking. He picks her up in a cradle carry and she struggles kicks her legs furiously to get down. He then sits on the coach and holds her tight in a ball, laughing at her helpless attempts to struggle and kick free. After he’s had his fun he then ties her ankles crossed with a purple stocking and ties her knees with another. He then tells her to be quiet while he goes to rob the house.

While he’s gone she struggles down to the floor to get to her phone. She calls her partner to inform him the burglar is there and tied her up with purple stockings just like the other women. Unfortunately the connection is bad, the phone is breaking up and her partner can’t hear her very well! The Burglar soon returns and tells her he’s leaving and to be quiet. She foolishly tells him she is just going to scream as soon as he leaves! So he tightly cleave gags her with yet another purple stocking! She is left hopelessly struggling to get free but she knows there is no way she can escape and needs to try to call for help again. She struggles her way over to the phone and eventually manages to retrieve it. She calls her partner and frantically gag talks to him, telling him that the burglar has left her there bound and gagged and begging him come right away! Hopefully he will be able to understand her gag talk! What a humiliating predicament for an undercover cop! 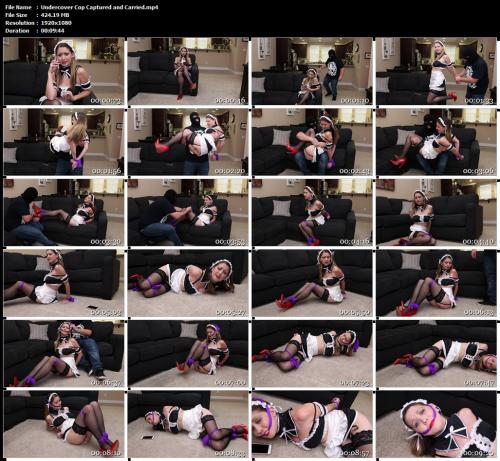