Chrissy and Dixie were out for a jog when they were captured by a stranger who tied them up and cleave gagged them! Now they find themselves struggling helplessly hogtied on his floor, frantically gag talking to each other about how they are going to find a way to escape before he comes back. He took their shoes leaving them in their white ankle socks and they have no idea what else he plans to do to them and they really don’t want to find out! Too bad for the girls they are not able to get free from the tight ropes before he comes back. He proceeds to play with their cute socked feet, alternately rubbing and tickling them as they squirm and mmmppph in protest. Then he pulls up their tops to grope their boobs, but it’s not long before he’s back to their feet! They are starting to realize this guy has an obsession with their feet! He slowly removes Chrissy’s socks to reveal her bare feet and they definitely don’t expect what’s coming next! He uses a thin piece of rope to tie her big toes together so tight that she can hardly move her feet! Then he repeats the same with Dixie, removing her socks and tying her big toes together as well. They are left struggling hopelessly hogtied and brutally toe tied, unable to call for help through their tightly knotted cleave gags and worrying what will happen when he comes back! 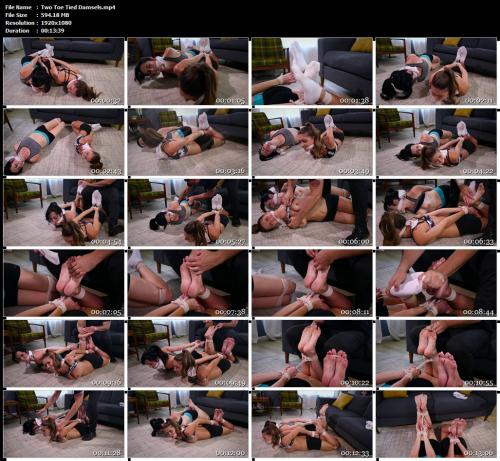