Kristall has arrived at her friend Chrissy’s apartment to catch a ride to class, but Chrissy is running late and tells her she is going to be a few more minutes. Kristall asks her to hurry up, they are going to be late, but Chrissy tells her not to worry, they are already super late and it’s no big deal if they just miss the first class of the day. Chrissy goes upstairs to finish getting ready, leaving Kristall waiting downstairs, all alone. The girls are unaware that a burglar has had an eye on Chrissy’s place for some time, and knowing the girls are usually in class at this time, he breaks in to rob the place! That’s when unexpectedly finds Kristall sitting on the couch! Good thing he is wearing his mask and came armed and prepared just in case! Kristall tries to ask him who he is but he just threatens her to be quiet and do as he says and she won’t get hurt! He tapes her wrists together behind her back and she starts to get really scared! So the burglar shoves a cloth in her mouth to shut her up and wraps the tape tightly around her mouth and head to muffle her cries! He finishes taping up her legs and body then hears something from upstairs, realizing that it’s probably Chrissy and he should find a place to hide until the moment to capture her too. He leaves Kristall struggling bound and gagged on the couch, desperately trying to get free to somehow warn Chrissy about the imminent danger!

A couple minutes later Chrissy finally comes downstairs, only to find her friend Kristall all trussed up and mmmppphhhinnggg helplessly on the couch! She tries to get her free but she can’t manage to tear the tape, it’s too strong! She has to find scissors, but is too busy frantically trying to understand Kristall’s distressed gag talk. She can’t understand that Kristall is trying to warn her of the man sneaking up right behind her! Moments later the man grabs Chrissy and begins taping her up too! Chrissy demands that he let her go and leave them alone! Time to shut her up too! Her mouth is packed and tape wrapped around her head even tighter than her friend just for being more annoying! Then he gropes her big boobs over and under her tight t-shirt as she mmmppphhhsss angrily through her gag! He finishes binding her legs together and then takes off both girls shoes, they won’t be needing them since they aren’t going anywhere anytime soon! He leaves to get what he came for and the girls are left struggling in their tight blue jeans and white ankle socks, furiously trying to escape so that they can call for help, but growing more an more hopeless as they realize that neither of them can manage to break loose. Now they are both stuck helplessly bound and gagged at the complete mercy of the mean burglar! They gag talk to each other, trying to figure out another plan, but it’s too late! The burglar returns and scolds them for moving off the couch and onto the floor as he told them to stay put! He informs them that he has finished robbing the place, but came back for one last thing, and unfortunately for them, it’s not to set them free! He removes all four socks one at a time, revealing their sexy bare soles, and takes their ankle socks and sneakers with him too as a souvenir! The girls have no idea why he wants to steal their socks and shoes, but that’s the least of their worries now! They are still stuck tightly bound and tapegagged, maybe someone will realize their not in class and come find them before it’s too late! They can only hope! 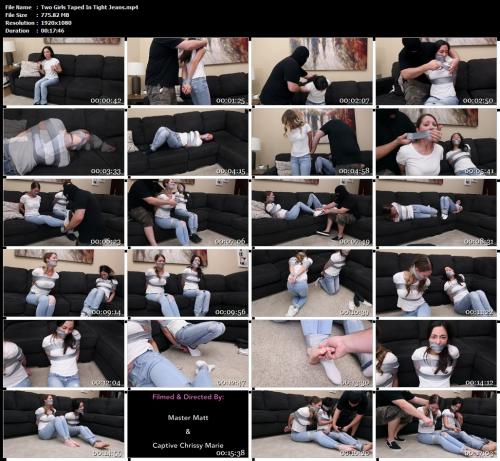