Nyxon is sick and tired of her posh Scottish roommate Amber making fun of her for being poor. So, she decides to teach her a lesson and hires a thug to break into the house and scare her. The scene opens up with Amber on the phone talking about how her father just deposited a large sum of money into her account, and that she was thinking about going car shopping. As she’s rambling on, she doesn’t notice that Nyxon’s hired thug has broken into the house and is sneaking up right behind her. He places his hand over her mouth as he grabs her, muffling her screams. He quickly shoves a sponge in her mouth and wraps duct tape around her head to secure it inside. He wastes no time getting his ropes and tying her up, and once she’s all secured on the couch, Nyxon walks into the room to taunt her. Amber struggles around, begging to be let out, but Nyxon just laughs and tells her to have her daddy pay someone to do it. While Nyxon is busy laughing at her roommate, she doesn’t notice that her hired thug is still there and standing behind her. He tells her that he’s ready to be paid for his services, but Nyxon tells him that she doesn’t have any money. He demands to be paid, so Nyxon starts to get a little flirty with him and asks him if there’s any other type of “currency” that he might accept. Having had enough of being played, the thug grabs Nyxon and shoves a sponge into her mouth as well. He wraps duct tape around her head and ties her up tight with the rest of his rope. Nyxon and Amber desperately struggle to get free, but the man just keeps adding more rope making it tighter and more difficult for them. 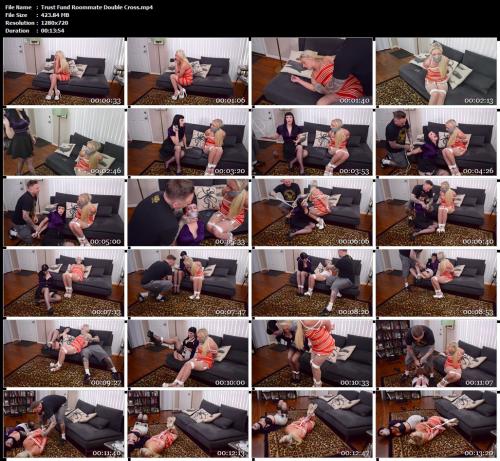