Chrissy is a conservative high school student visiting the house of one her only friends. While waiting for her friend she meet the older brother, who tricks her into being tied up because she is shy and naive. The brother has her bound with zip ties to start. She thinks it isn’t so bad but then he tightly zip ties her elbows so that they are touching. Her demeanor shifts to defiant and bitchy at this point as she starts demanding angrily that he let her out. She starts screaming for her friend Emily at which point he cleave gags her! She struggles and gag bitches angrily though the gag asking him what he thinks he is doing! The brother decides the gag isn’t working well enough and proceeds to ungag her after which, she calls him a piece of and tells him he is going to get in so much trouble! He takes off her glasses and she gets even angrier as he puts a ball gag in her mouth. She furiously curses him out and continues to hurtle insults demanding to be let out through her gag.

After a couple minutes, he relents and ungags her, puts her glasses back on and tells her he thinks it’s time to go up to his room! She responds “What? Go up to your room? Oh hell no, I know what that means! Let me out, mmmpph!” A rag is suddenly stuffed in her mouth and she is wide eyed as she is duct tape gagged with two strips of tape! He then secures her even more by adding duct tape around her ankles, thighs, wrists and arms! He takes off her glasses again and carries her around the room over his shoulder, as she defiantly gag bitches and struggles the whole time! At this point, he puts her down but decides she is still making way too much noise and produces a soaked rag and covers her mouth and nose with it to subdue her. She eyeballs it hard and struggles to fight it but is eventually knocked out. When she wakes up she is still taped up and gagged but is also now hogtied on the bed in the brothers room! She looks very scared as she helplessly struggles and mmmpps though the gag, begging him for mercy with her big blue eyes! 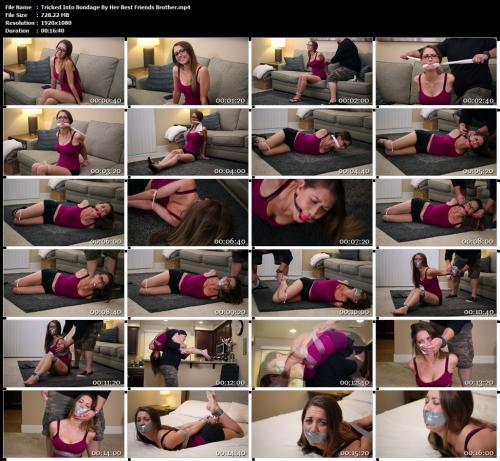