Rachel is a strange business boss and Tony works for her. She walks in the room and says: Rachel: Did you take care of that thing with the Greco family? I need my rivals dealt with. Tony: Not yet Rachel: He’s taking my territory and you’re waiting around instead of following my orders? You’re useless! She angrily sits down and turns her back to him. She then threatens to make him disappear if he doesn’t take care of the Greco Operation in the next 3 days. Tony: Is that so? As he says this, he grabs a cloth, quickly approaches Rachel and subdues her with it over her mouth and nose. Cut to Rachel is nude, sitting on the bed. She’s been tied up in white rope with her hands behind back, shoulder, chest rope harness, legs tied above the knees around the thighs, and then below the knees and ankles. Her attitude at this point is haughty, defiant and irritated. She tells him that he just made a massive mistake, definitely his last. She talks threateningly about how she’ll have him hurt and how she won’t miss having such an incompetent man working for her. While she’s talking, Tony ties her big toes together. Rachel complains, tells him to stop, and says it’s gross. She says she hates having her feet touched but also angrily tells him that these are the last feet he’ll ever see so ok do you’re worst, finish tying up my toes. He then begins tying ropes across the soles of her feet and she asks him if he’s got a foot fetish or something. As he finishes tying her soles, she says she’s had enough of his little game and is going to call one of her henchman to take care of him. Tony, while she’s still talking, shoves her sock into her mouth and wraps it with a cloth around her mouth to make a cleave gag; Once she’s gagged, Tony adds a tight crotch rope. He then hogties Rachel on the bed. At this point, he tells Rachel that yes he does have a foot fetish. Tony spends the next 2 minutes sucking on her toes, taking breaks to kiss the rest of her feet and other toes and occasionally tickle her with his hand, Tony then says he needs to make a call. He picks up his phone, dials and says, “Hi Greco – I’ve got her all set. You said $300K to deliver Rachel alive correct? He pauses – Great! I will drop her off tonight.”..Rachel is furious and begins struggling violently, shaking her head, and making lots of noise. Tony removes her gag and Rachel’s attitude changes dramatically. She realizes that her best chance to escape is to either bribe Tony or seduce him. So she tells Tony 3 things: 1) she’ll pay him 500K Euros to let her go; 2) she’s sorry for an awful boss and treating him so horribly, and 3) she’ll even fool around with him if he wants. Tony replies that he’d like to consider her offer in silence, so he grabs a sponge and shoves it into Rachel’s mouth. Tony then wraps clear tape around Rachel’s head to create a cleave gag. He does not tape over her top or bottom lip, so it’s a cleave rather than a wrap gag and Rachel’s mouth is open. After Tony’s finished gagging her he watches her for about a minute. She seductively writhes against her crotchrope and wiggles her feet & toes seductively at him. Tony takes the bait and grabs Rachel. He slaps her ass, touches her breasts, plays with her crotchrope, and flips her back and forth from her side back onto her stomach. He then worships her feet again. This time Rachel’s reaction is very different as she moans and seems to enjoy it while he does it. After a few minutes of this he tells her “Thanks, that was fun, but still going to go with the $300K from Greco. I just don’t trust you.” He says this as he grabs a rope and ties Rachel’s big toes back to her crotchrope. During this time, Rachel tries to talk to him and convince him to stay, but he tells her he can’t understand her. Once he’s finished connecting her big toes to the crotchrope, he says he’s going to go get his car ready. Rachel freaks out and struggles frantically on the bed..(ENGLISH DIALOGUES, BONDAGE, ROPE BONDAGE ON SCREEN, NUDE BONDAGE, STUFFED MOUTH, CLEAVE GAGGED, CROTCHROPE, FOOT FETISH, FOOT WORSHIP, BAREFOOT, HOGTIED, SPANKING, GROPING, TOE TIED, STRUGGLING, GAGGED WOMAN, WRAP TAPE GAGGED, TAPE GAGGED, HD VIDEO) 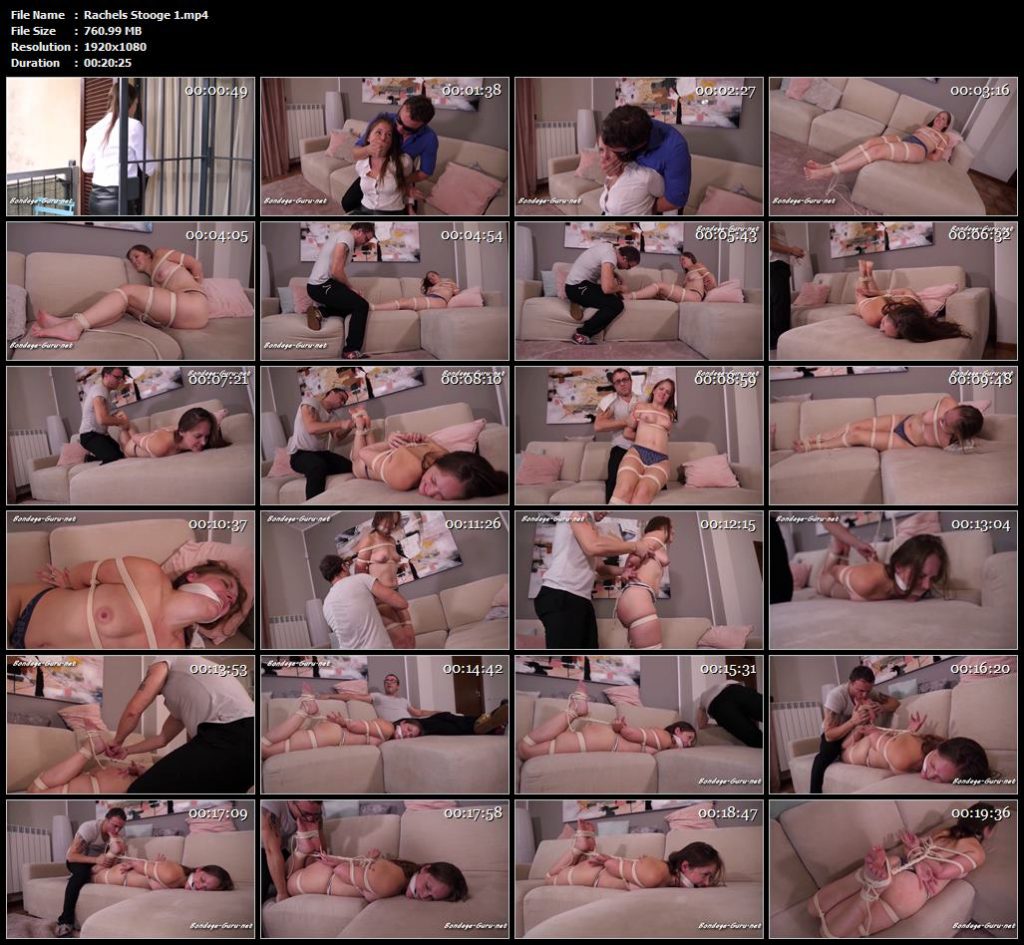