He caught his ex snooping out around his house and now he is really going to teach her a lesson! He barely gave her a chance to explain herself before he gagged her with the ballgag that she remembers oh so well from when they were together. Whatever her real intentions were for coming back around, he knew she was up to no good. She definitely wasn’t coming by for a play date but he is going to play with her one last time anyway, whether she wants to or not! The scene begins with Chrissy already stripped naked and bound with rough jute rope cinched tightly around ankles, thighs, wrists, elbows and breasts! He elbows are brutally crushed together and her breasts tight and bulging from the pressure of the unforgiving chest harness. She helplessly squirms and protests through the big red ballgag crammed in her mouth as he feels her up and squeeze her tits. Her eyes grow wide when he begins to bring out some toys to use on her. He starts with the riding crop, first teasing her with it, then giving her some nice hard whacks on her ass, breasts and belly. Then he realizes he forgot something. a tight crotch rope to further torment her with!

He ties on a cruel crotch rope then starts to whip her with the flogger and even gives a few hard spanks with his bare hand! Once he is finished with her ass, at least for the time being, he binds her into a strict hogtie and rolls her onto her side to give her nipples some attention. He remembers just how sensitive they are and he intends to use that to his advantage now. She reacts in pain as he attaches clover clamps to each of her nipples then pulls on them to torture her even more! He leaves them on as he continues flogging her until she rolls over on her clamped nipples in an attempt to struggle away from him! It backfires on her as he just switches back to the riding crop and uses it punish her helplessly hogtied bare soles instead! He then proceeds to remove the clamps which she finds out is even more painful than when he put them on.and hopefully she didn’t get her hopes up because he isn’t letting her go just yet.or anytime soon! He pulls out another set of clamps to test out on her sore tortured nipples as she desperately begs to be let go. Instead she is left helplessly struggling until he is certain that she has learned her lesson and won’t be coming back for more! 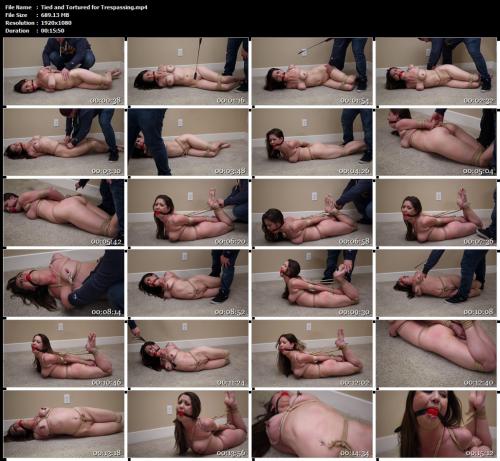 Mummified by the Enraged Electrician