Chrissy is in detention again for not pulling her weight at school and obviously not caring about her coursework. She is wearing a traditional school girl outfit with a white blouse, pleated plaid skirt, and patent high heels. As the teacher (POV) is scolding her about her bad grades and lack of concentration, it seems Chrissy is still more interested in squeaking her shoes together than paying attention. At first, the teacher tries to ignore the squeaky sounds, but he becomes increasingly annoyed. He asks her to stop squeaking but Chrissy carries on regardless.if anything it makes her want to do it more!

Finally the teacher has had enough of her bratty attitude and relentless squeaking so he decides to teach her a lesson by tying her up, starting with the ankles and legs, then binding her wrists together behind her back. Chrissy continues to protest with the teacher, demanding to be let go, so he finishes off with a nice big ball gag to silence her! The teacher leaves Chrissy alone to think about her predicament. She tries to get free but doesn’t make much progress in loosening her binds, all she can manage to do is squeak her shoes as she struggles and mmmpphhhsss helplessly in the tight ropes and gag! 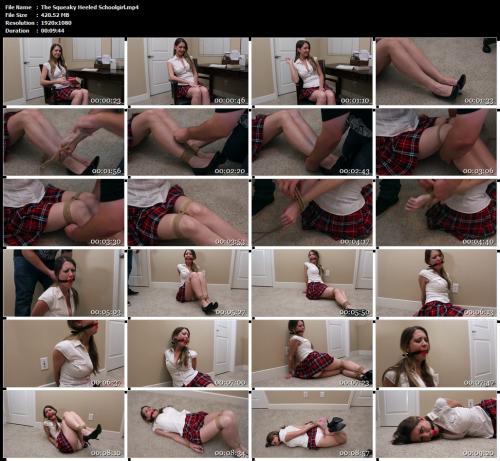