Chrissy has been low on spending money and really needed some new wardrobe, so she decided she would try shoplifting a few things and did some research on what to do. She went into the store in just her long coat and knee high boots and snuck out with whole bunch of clothes underneath. She thought she got away, but she isn’t aware that the owner saw her and followed her home. He would usually just call the police but whenever he catches a super hot chick shoplifting, he has other ways he like to get his repayment. Chrissy has just arrived home and is excited over how much she scored and how she is happy no one noticed! She removes her coat and boots and admires her brand new tights. Just then there is a knock at the door, and she wonder who it could possibly be. When she open the door the man forces himself in without her invite and she is shocked and confused. He tells her that he knows what she did, and she tries to play it off like she has no idea what he is talking about. She eventually confesses, but begs him not to call the police, she can’t have a criminal record! He forces her to take off everything she stole from him. She starts with the two scarves she hid under her coat. Then she embarrassingly admits to taking two pair of panties, and removes them from over her tights. Next she removes the white pantyhose, yes she stole those too. She insists the dress is hers, but he doesn’t really believe her. He forces her to remove it to reveal that she was hiding a stolen tank top underneath the dress as well! Now she stands completely naked and humiliated and unsure what to say.

He gives her two choices, either he will call the police, or she can let him tie her up. She wants anything but for him to report her, so she agrees even though she is really embarrassed and worried about why he wants to tie her up! He uses all the clothes she stole, the scarves bind her wrists and ankles, two pair of panties are packed into her mouth with the tights wrapped around between her teeth, the tank top joins her elbows and the dress binds her knees. She struggles and mmpphhss, the gag is very tight and visibly uncomfortable on the poor helpless girl. She insists she has learned her lesson and will never shoplift again, but he isn’t convinced. He knows one way for sure. He leaves her alone struggling hopelessly, but before he goes, he tells her she can keep the clothes now, if she ever manages to escape which he doubts she ever will! Chrissy struggles and calls for help, but no one will ever hear her with that huge wad of stolen panties in her mouth! 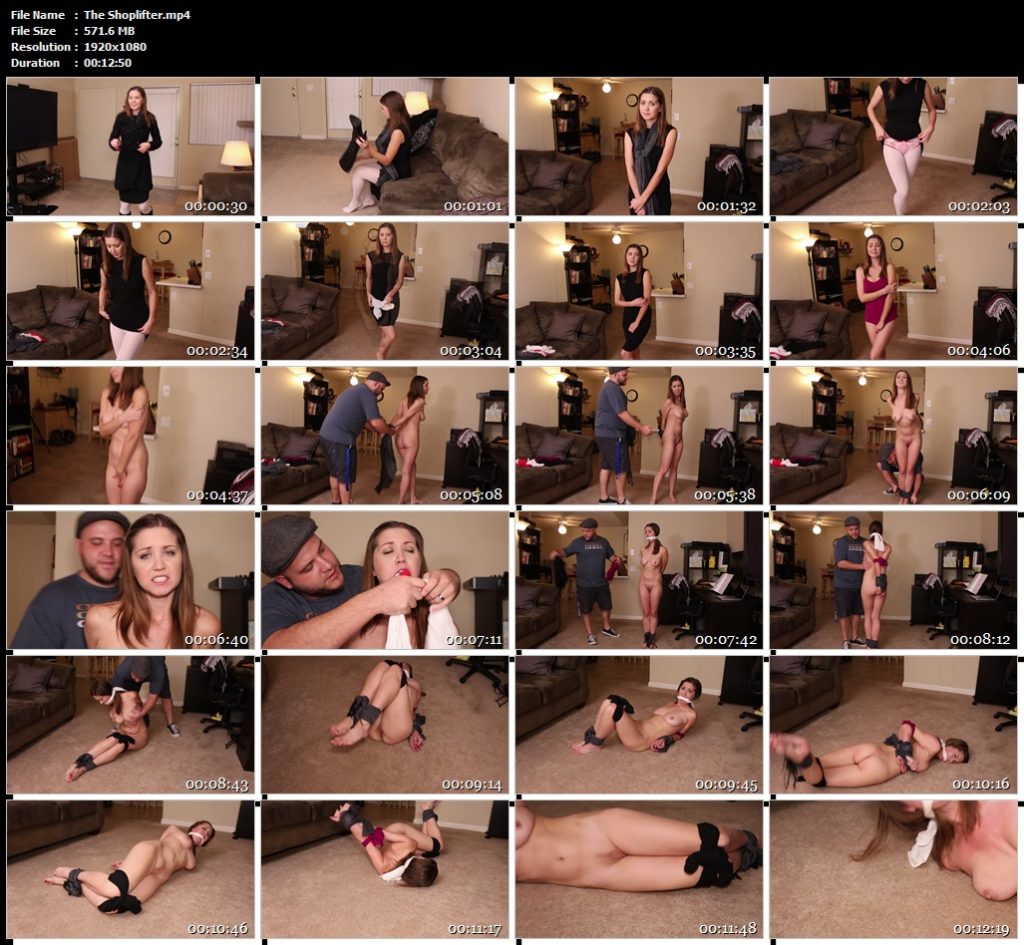