The role playing gone bad… – The attic of Jack Bond

Our real life stunning sisters Carleyelle and Jodielle play another funny bondage role playing. They accept to help a friend that has decided to made a short movie for a sci-fi film festival. They have to play to be two rival Super heroines that fights for become the most important heroine in the city. Is a comedy movie, he said to them and I;ll be the evil man. But he has another plan in mind…lol. Jodielle play the role of female Robin and Carleyelle play to be Lady Flash. Jodielle arrives to the enemy house first and she finds his laptop and she start to search the files she needs. She can go so far in her research cause Carleyelle arrives few minutes later the two Super heroines,following the script, start to fight. At the point, the heard the voice of the evil man (as planned…) and they know that they’ll be gaggsed and put on sleep. But, unfortunately for them, this part is not the movie…lol.. He use a real gas and they fall to sleep soon. When they wake up again, they are completely tiedwith ropes and ballgagged (Carleyelle with the hands behind her back, body, feet and legs…gagged with a red ball gag. Jodielle tied in the same way and gagged with a black ball gag…) As soon as they wake up, the need few seconds for understand they are in a big troubles. They start to struggles and moans, hopping to the door for try to open that and escape outside, but the door is locked. So they come back on the sofa… few minutes later, the fake movie director arrives and put on the two scared sisters lots of clear tape over the ball gags. The two sisters remain the last minutes struggling and moaning desperate… 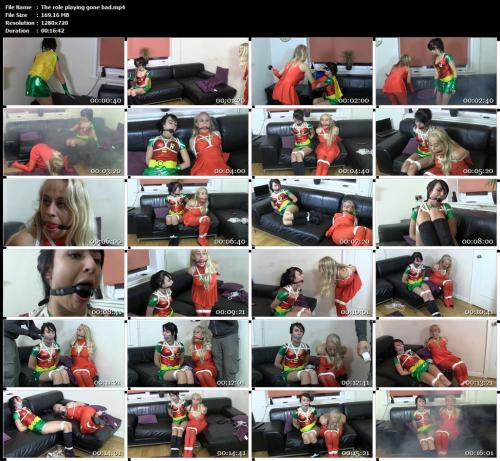 Carleyelle – The mummification nightmare continues – The attic of Jack Bond

Altsiren in troubles – The attic of Jack Bond

A strange package – Final part – The attic of Jack Bond

Where is my package? – The attic of Jack Bond

Raven tied up and held until her husband pays up – Bondage: JJ Plush, Born to be Bound