The poor girl just needed the money. She answers an add in the paper for a fetich model. She really didn’t even know what that meant she just knew it paid good. She shows up for the interview. The people seemed nice and started telling her all about the job. When the girl found out it was bondage it kinda scared her. The more they talked the less she wanted to do it. She tells them that she was sorry but just couldn’t bring herself to be tied up by someone. She shakes the ladies hand and turns to leave. That’s when it happened. The man grabs her form behind and the women punches her in the stomach. The girl hunches over in pain. He forces her to floor roughing her up. She could not believe what was happening. He grabs her and stands her up telling her now be cool and everything will be fine. He tells her just do what you are told and we will let you go when we are finished. The girl appreciably settles down and lets the man tie her up.
She sobs and cries as he ties her arms scared for her life. He shoves a large ball gag in her mouth then wraps her head with some king of material. This muffles her sounds. He returns to her arms welding them together behind her back. He forces her up and adds a tight crotch rope. He ties her legs together down to her knees. She can barely stand like this. She cries as he forces her to walk around. He then pushes her back down in the chair. With the wrap he blind folds her. She is so over whelmed she goes quite with fear. He pulls her head back and ties her head off to her elbows. At this point he disappears and she is left alone to struggle. He is quite and sets back and admires what he had done thinking this girl had possibilities. A short time later he steps in forcing her to her feet. He walks her around again in this position. He tells her you have done a good job but there was one more scene he needed her to do has he walks her out of the room. 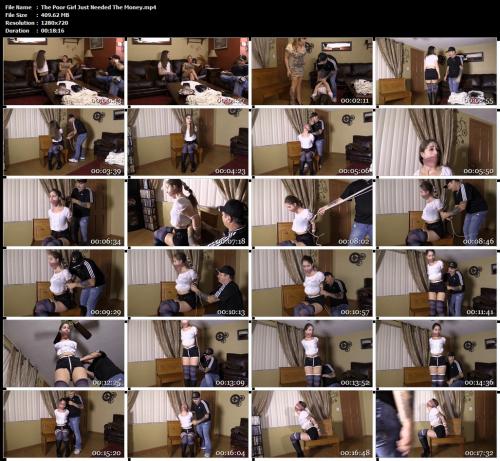