Chrissy called him over to her place to find out when he is going to pay her and her husband back the money he owes them. Knowing that he already paid her husband back the money he is suspicious of the real reason Chrissy asked him to come over. Recently, the man has been on a trip where he bought an ancient artifact. It is a glove with magical properties. When he puts it on and touches someone with it, it makes them have to tell the truth. It also causes them to feel relaxed and aroused. When he shows it to Chrissy she tell him she can’t believe he would spend so much money on a stupid glove. Then he puts it on and grabs Chrissy by the arm. She immediately succumbs to it’s powers. It’s not long before he finds out the real reason she called him over. Turns out Chrissy’s husband is out of town and she wants him to play with her. When he lets go of her arm she snaps out of her trance, briefly confused about what happened. Then she goes back to lying about why she called him over. She doesn’t remember anything she said when he was touching her with the glove! So he grabs her arm again and asks her if she has any fantasies. She tells him she has a lot of fantasies but he wants to know her wildest one. That’s when Chrissy confesses that she wants to be bound and gagged and have naughty things done to her while she is completely helpless!

Next thing she knows Chrissy is getting tied up in her garage! He makes it a point to keep the glove on her as he ties her wrists, but when he goes to tie her ankles he takes the glove off. Chrissy snaps out of her trance and is really not happy about being tied up. As he ties her elbows she demands to be let go or she will start screaming for help. So he grabs her with gloved hand again, long enough for her to submit to having panties stuffed in her mouth. He lets go when he wrap around tape gags her and she is still angry and protesting through her gag. Next he starts to bind her arms in a chicken wing, keeping the gloved hand on her for a while. Strangely enough though, the next time he takes it off there is no change in Chrissy’s demeanor. She doesn’t start protesting and demanding to be let go. Since she can’t be under the glove’s spell if he’s not touching her with it, that must mean she is really enjoying being tied up now. After all, he did get the truth out of her earlier thanks to his magic glove! He finishes tying her up and Chrissy struggles in the strict bondage, enjoying every minute of it. Later he comes back and adds a crotch rope and hogties her and that really turns her on! She struggles sensually in anticipation of what he is going to do to her now that she is so helplessly bound and gagged! 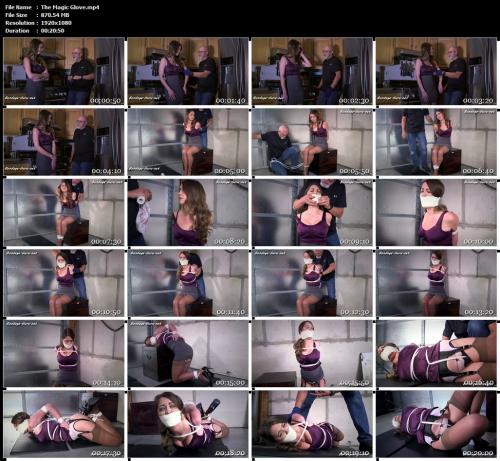