In the secret activity of “recruiting” nice looking girls for the slave market Raimondo found the help of a very charming and astute young woman, Ivy Satinee.The movie starts with Ivy presenting her new friend Bianca. I (voice off camera) explain to Bianca about the content offered by my studio and she tells me a bit worried that she never tried bondage before (which is actually true, she’s at her debut). So i ask Ivy to tie her hands a bit to test her skills. Bianca reluctantly agree, but while Ivy wraps some rope around her hands she looks increasingly uncomfortable. I noticed that she Bianca could have some nice looking feet and i ask Ivy to remove her shoes. Bianca, showing some foot shyness, openly refuses to show her feet despite all the persuasion tried by Ivy. So i suggest that maybe Bianca needs to be “softened” and Ivy who understood everything makes a smile and goes away for a moment and then returns with a handkerchief soaked with chemicals. She puts it on Bianca’s mouth and nose and, after some struggle, she puts her to sleep.

In the next scene, Bianca lays on the bed. Ivy finishes to hogtie her and then puts a cloth in her mouth and wraps a foulard around her Head (OTM gag). Bianca wakes up and she looks both furious and scared by the situation. She immediately tries to free herself. Being her a strong and athletic girl she manages to undo the knot tying her legs, but her escape attempt is foiled by Ivy who puts a cloth on her face for the second time and puts her to sleep.

With Bianca finally secured, me and Ivy can talk business while having a drink together. Ivy is aware that Bianca will fetch a high price on the slave market, so she wants a higher percentage of the income. I know that this moment would have arrived. Women gets easily greedy on the matter, so i have taken some measures to secure my income. I tells Ivy that she would deserve to see the customers herself. Ivy immediately starts to feel dizzy and realizes that i have put something in her drink. Too late. She falls asleep and i got now two fantastic beauties for the market.

In the next scene both girls are hogtied an gagged on bed, side by side. They look very angry but i have the solution to calm them, some chemicals and a cloth could make them sleep for enough time before the men sent by my customers can take the packages to the next location.

Left alone Bianca and Ivy after a while wake up and both realizes that they have to collaborate to escape together. Will they succeed?

Both girls are at their debut for Captured Beauties and Bianca was really never tied before. Both girls did some fetish work before. They are also accomplished wrestlers. I have to say that both are magnificent damsels and i plan to make use of their combat skills in future. You’ll see them again next year in a custom video that was ordered with them. 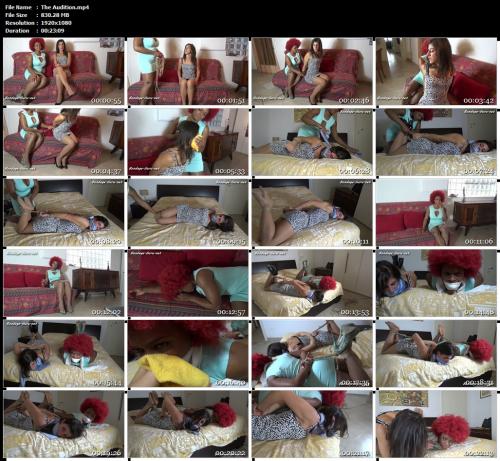 Hannah…Tied and muzzled in Boots! – TIED IN HEELS