Ashley arrives at a yoga retreat and is greeted by Dixie, the coordinator, who tells her that she will be meeting the leader for a one-on-one training later. Ashley kind of gives her a funny look at the term “leader” but doesn’t say anything. Dixie gives her clothes to wear for her session, telling her that there is a uniform for sessions with the leader. Ashley doesn’t think much of it and goes off to get ready for her one-on-one.

Later, Ashley wait for the yoga instructor to arrive…in her uniform. He enters and immediately begins talking to her about how his training will change her life and how she will never be the same again after today. He says to begin he needs to test her flexibility and begins touching her in a rather aggressive way. He pulls up her shirt exposing her breasts. Ashley yelps and asks him what the hell he’s doing. He explains that he needs to see her body’s full range of motion and she reluctantly lets him pull her shirt off. Next he bends her over and pulls her arms behind her back. He tells her that part of his practice is using rope to maintain consistent poses and he grabs a piece of rope and starts tying her wrists behind her back. She struggles as he ties her wrists and yells at him to stop. When he finishes her wrists he pulls out a ball gag and tells her another of his teachings is the meditative quality of silence and he shoves the gag in her mouth. Once she’s gagged, he puts her on her back and pulls her skirt off so that she’s naked and begins tying her ankles. He ties her chest as well and then puts her down on her knees. He tells her that his most important teaching is that sexual release is the key to enlightenment and that today she is going to be his practice. He pulls out his cock and rubs it on her face and ball gag a bit before taking off the gag and shoving it in her mouth. He fucks her face and makes her blow him until he cums in her mouth. He gags her again with her panties, keeping them in with clear tape. He ties her in a crotch rope hogtie, leaving her to struggle. After she’s struggled for a while, Dixie enters. She says that this is just the first day of her training and that it gets much better. Then she sprays something in Ashley’s face, putting her to rest.

It’s the last day of Ashley’s yoga retreat, she’s now fully brainwashed and standing at attention with Dixie in their uniforms with goofy smiles on their faces and blank looks. The Leader enters and congratulates Ashley for finishing the first part of her training and being a star pupil. He tells her now it’s time to go back out into the world and bring him back more young, attractive female followers like herself. 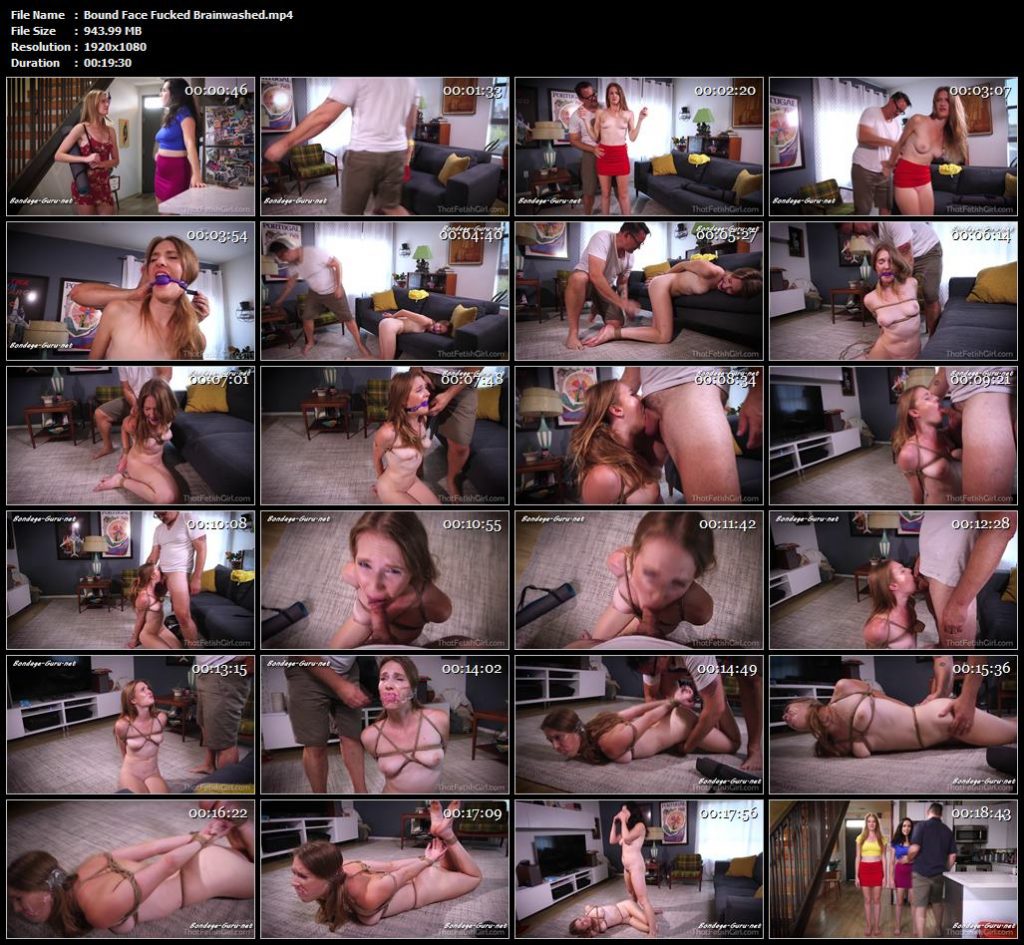 Almost, But Not Quite – Dixie Comet – That Bondage Girl