Sarah is the girl who lives next door. Ever since he has moved in, she has been a big flirt with him, coming over dressed in tight short skirts and high heels. Today she has come over and she brought along some interesting items. Apparently she saw a movie where a girl was tied up. So she brought along some rope and asks the man if he will tie her up like the girl in the movie. She thinks the idea of being tied up and gagged with him would be a lot of fun. At first the man is hesitant, but Sarah has her ways and he eventually gives in. But he tells her, that if he does this, he wants to do it his way. When Sarah agrees, he brings out a roll of tape and trussed her up good and tight. She also had brought along a bandanna and asks him to gag her with it. When he does, the man explains that this bandanna will not keep her quirt enough and in real life, if someone really tied her up, they would gag her different. Before Sarah can agree or disagree, the man stuffs her mouth with panties and wraps her face and mouth with more tape. Sarah now finds herself completely helpless and she starts to protest through the gag. She struggles hard to get loose, but she is well secured. Then the man tells her that she is a very good looking girl and if someone had her bound and gagged like this, he would surely take advantage of her. So to prove his point, her opens her blouse and takes her tits out of her bra. He then puts her face down on the floor and pulls her panties and pantyhose down. He leaves her to struggle bound, gagged and totally vulnerable. 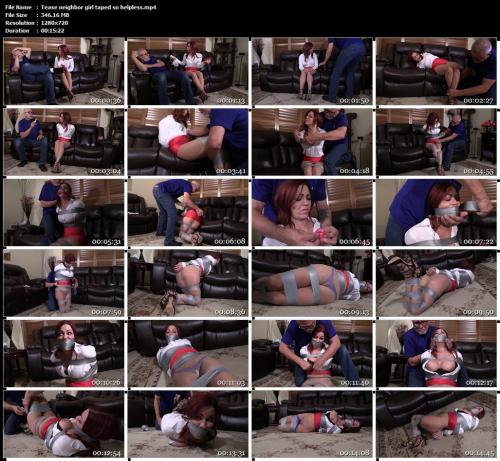