Beautiful 18 year old Selena sits on the ground with her wrists and ankles tape tied. She implores her captor to set her free, but he just cackles and his heavy breathing, as he comes closer, indicates excitement (or an asthma problem!). He fondles her as he sits behind her on the ground, really kneading her perky young tits, while keeping her handgagged. Then he brandishes some black tape that is presses over her pretty pleading mouth and wraps the tape around her head several times and then also blindfolds her with said tape! With her senses blocked she thrashes about with no sense of direction as he cops another feel before getting up and leaving her this way. She looks ridiculously sexy in bondage as lingering closeups and full body viewings convey plenty to those who like to feel as if they’re right there with the action! After some time has passed, the villain returns and strips her nude, touching her all over. Groping her tits and ass, he then rubs her wet pussy as well while she ‘mpphs’ into her gag. Left to languish, the helpless hottie struggles away, trying to get free to no avail. As the minutes pass, she grows visibly tired and eventually stops straining and decides to rest until the masked man returns. 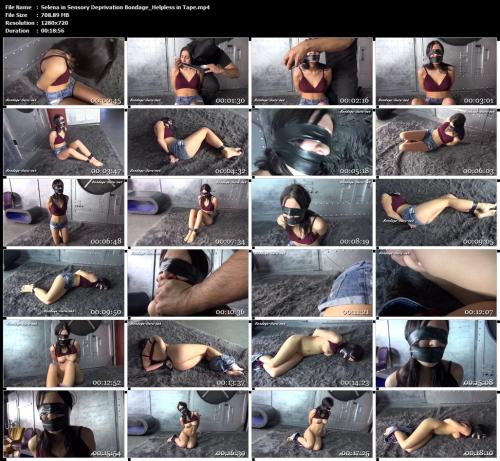