Stunning busty babes Astrid and Christiana are college roommates who decide to drive home for a visit. Unfortunately for them (but maybe not us the viewers!), their car breaks down before they can reach their destination. To make things worse, the place they’ve broken down in appears largely unpopulated and they aren’t getting phone reception either (should have switched to a better provider!). They decide to go search for signs of life and knock on several doors until one swings open quite suddenly. Since it’s Halloween, the girls are only a little surprised to see the guy standing in front of them wearing a mask and sunglasses (as if he’s some radioactive mutant). He beckons them inside as another creepy fellow appears. The two creeps are clearly enamored with these two lovely ladies and when questioned contend that they are planning to have a Halloween bash (it’s just clear who is going to attend since no one seems to be around!). One might almost surmise that these masked weirdos have been watching the sexy ladies in the hopes that they’d swing by! The girls insist that they have to get going and would like to use any phone these hicks might have. One fellow volunteers to show platinum blonde Astrid where the phone is upstairs and follows along closely behind as they ascend the stairs. He suddenly pounces on her, handgagging her into silence as it would appear one could judge a book by its cover and these two creeps actually are creeps! Easily gaining control of Astrid, he helps himself to fondling her sexy body for a bit and then makes her walk down the stairs. He keeps a hand over her mouth while Christiana talks to the other weirdo. Without warning, Christiana is also handgagged as the two girls realize that they’ve fallen into the hands of a pair of rural perverts! As the two bumpkins talk, it becomes clear that they’re related in some way (they’re father and son or brothers or something, it’s hard to tell!) and belong to some freakish cult. They decide to toy with the hot city girls and grope their sexy bodies all over. A lap dance is proposed and each cultist takes a girl to perform. Lots of lap grinding and body touching transpire as the girls get handgagged when they start protesting. Finally, it’s decided, Christiana will be marrying one of the yokels and Astrid will be a witness (and maybe a bride herself soon!). They move outdoors as we see Astrid’s mouth taped shut by one of the hicks while the other guy holds onto Christiana, fondling her and keeping her handgagged. The ‘father’ performs a rather bizarre ceremony in which Christiana is wed to the hick’s son which culminates in a rather romantic yet creepy kiss! Then it’s time to consummate the wedding as father and son have the ladies in their grasp and keep toying with them. With their wrists tied, the girls are stripped nude and ‘taken’ side by side by the yokels! After this the girls are dragged off for what will no doubt be an experience (or more likely a terrible ordeal) they won’t soon forget! Hopefully, their parents will get some authorities to search for them unless their car have already been seized and taken apart by the hicks! 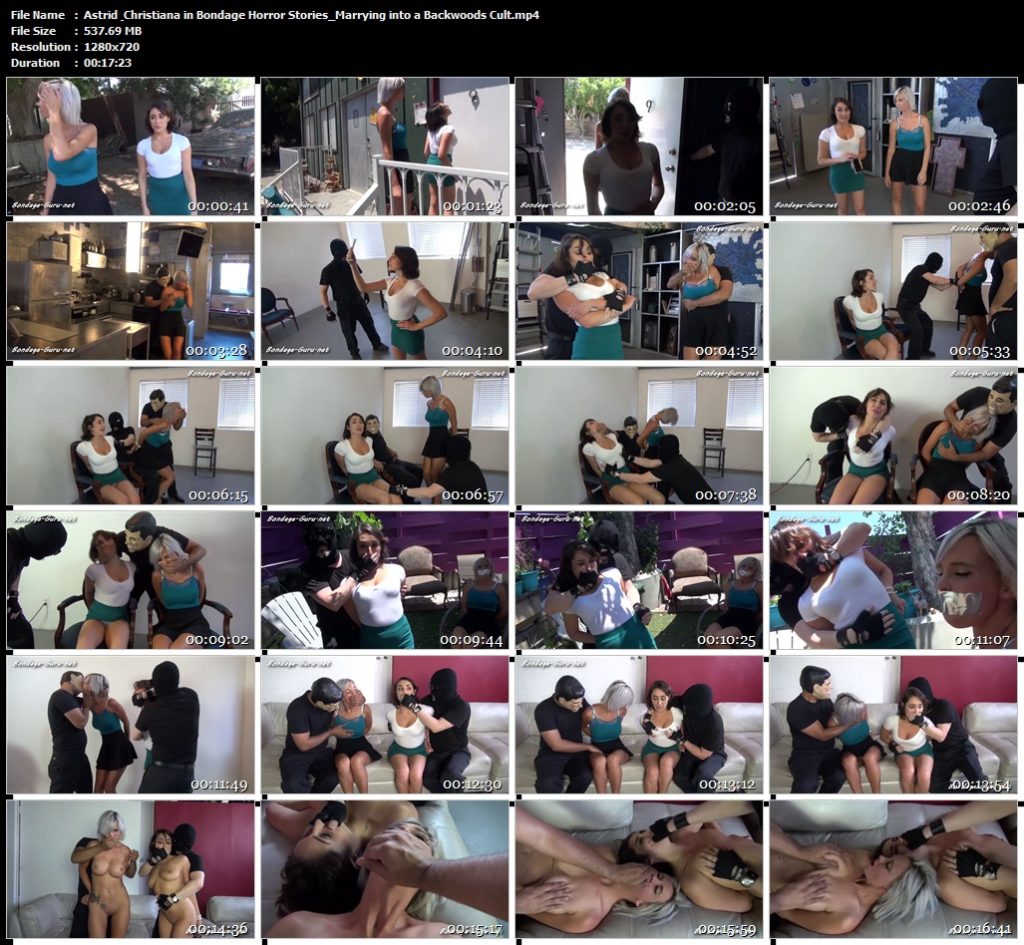