After part one Super Spy Chrissy felt bad for the poor guard. She kneed him in the balls, smashed a bottle over his head, knocked him out with a poisonous kiss, and he will likely get fired for allowing her to steal the docs. So Chrissy snuck him back to her place, tied the guard up on the couch and gagged him. The guard wakes up (camera POV) and looks around, noticing Chrissy on the couch next to him. She explains that she felt bad for him so she brought him here for a little fun and games. She removes her robe to reveal her sheer bra and panties and shiny black pantyhose and high heels. She shows the guard the white cloth and explains that she used it on him as payback for using it on her. She starts to give him a lap dance while talking trash about tricking him, tying him up and making him helpless. Mid dance her phone rings and she excuses herself to answer it. She has her back to him as she is talking on her phone about some funds transfer. While she’s distracted the henchman manages to get one arm free and grabs the white cloth Chrissy left of the couch beside him and stashes it behind his back. Chrissy ends the call and returns to her lap dance shenanigans teasing the guard. She turns around and rubs her butt on him, then she’s back up front in his face teasing him with her boobs in his face. He suddenly pulls out the cloth and POV knocks Chrissy out. She couldn’t believe he got his hand free! Chrissy collapses onto the couch. The henchman frees himself and flips Chrissy onto her stomach. He ties her hands behind her back then fondles her ass a bit. Next he ties her ankles and uses micro foam tape to gag Chrissy in order to protect from chemical kisses. He checks her eyes and realizes she will still be out for a little while longer. He has a seat on the couch and caresses her nylon clad legs until she wakes up. When she comes to he explains that he is going to have some fun with her for all the trouble she has caused him. He removes her shoes and plays with her stocking feet. Chrissy starts to get worked up from all the attention. Then he hand gags her tightly and Chrissy starts liking it even more. The guard asks her if she’s enjoying her self and she shakes her head yes. Then he asks her if she would like to orgasm and Chrissy enthusiastically indicates she would. As ultimate payback, he replies “too bad!” and applies the white cloth over her mouth and nose and Chrissy slowly fades back to sleep. 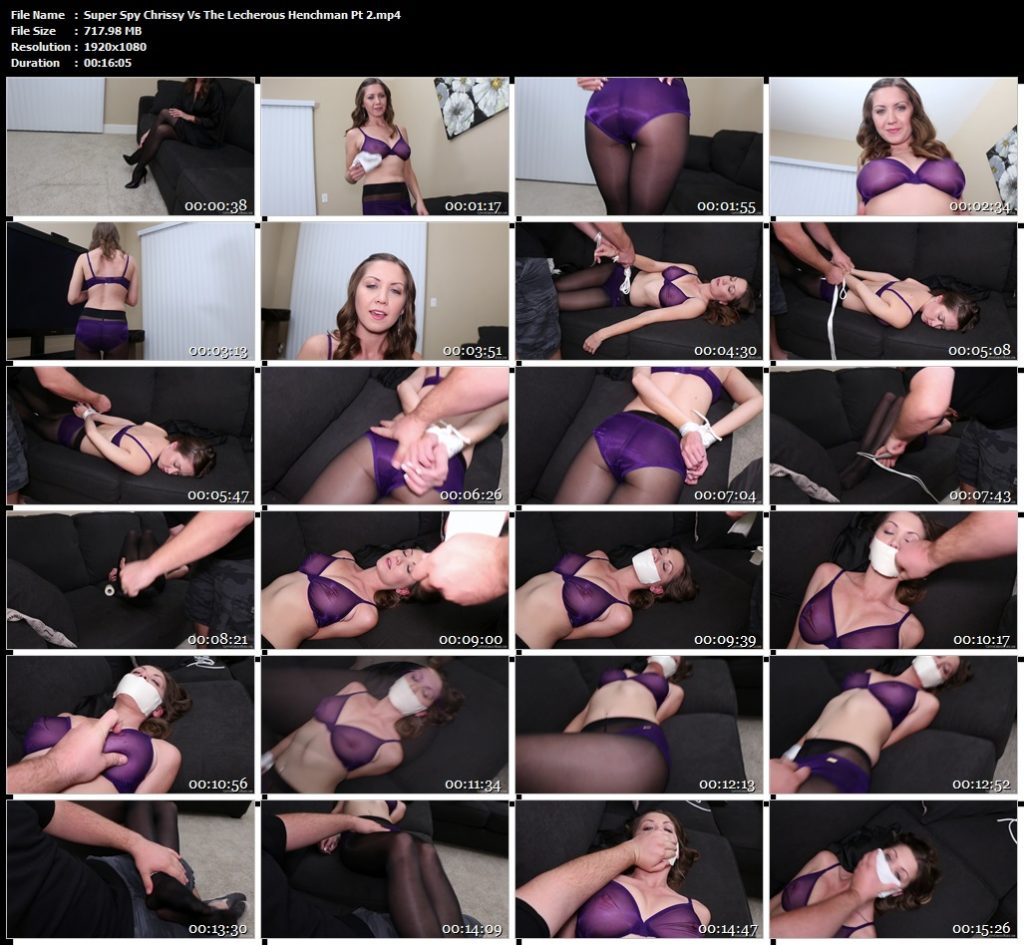