Chrissy is a super spy who is on a mission to steal some secret documents. She is undercover at a huge Hollywood mansion. The owner of the mansion was hosting a huge party and she got herself invited by pretending to be a model. Chrissy is wearing a sexy black dress, black shiny pantyhose and classic black stiletto pumps. The secret documents that Chrissy needs to steal are upstairs, guarded by a Henchman in a locked room. Chrissy needs to deal with the guard in order to get to the documents.

The scene opens up POV of the guard as he is standing in front of a locked room in the mansion. Chrissy comes stumbling around the corner, obviously drunk because she is staggering, slurring her speech, and has a wine bottle in hand. Chrissy pretends to be lost, drunk, and confused and asks the guard “is this where the bathroom is? I’m so lost!” The guard instructs her that the area is off limits to party guests and that she will have to turn around and go back the way she came. So Chrissy tries another approach, cozying up to the guard and telling him ” you’re kind of cute. What’s your name?” then asks “what are you doing down here all by yourself?” The guard starts to get irritates and tells Chrissy it’s none of her business and she will need to leave immediately. She distracts him once again by flirting. “awe come on, don’t you want to have some fun with me?” Just to get close enough to knee the henchman in the balls and smash the wine bottle over his head! He is knocked out cold, so Chrissy instantly snaps out of her fake drunk act and makes a call to control to tell them the guard has been neutralized and she is going to search for the docs now. She enters the off limits room and starts hunting for the documents. Her back is turned as she looks in some drawers, unaware that the henchman has recovered from his knock out and is sneaking up being her! He grabs he and clamps a white rag over Chrissy’s face. After a brief struggle, Chrissy’s body falls limp as a rag doll in his arms.

He drags Chrissy over to the massage table, gently placing her on it then tightly ties a cleave gag in her mouth. While she is still knocked out, He goes on to tie her wrists together up front then stretch her arms over head to tie them off to the table. Last but not least he ties Chrissy’s nylon sheathed legs and ankles and secures them to the table as well. The henchman admires Chrissy while he waits for he to wake up. He checks her eyes and fondles her up from her feet to her breasts. After a couple minutes Chrissy starts to stir from the attention, slowly waking up and responding to his touch. Once Chrissy fully awakes she realizes her situation and that she needs to get untied and complete her mission. So she continues to respond to the guards touch. She’s only half faking her excitement. The other half is she is playing him to get untied. Chrissy indicates that the guard should remove her gag. He warns her if she cries out that “we’ll both be in trouble. Do you promise to keep quiet?” Chrissy nods her head in agreement. The guard removes the gag and lets it drape below her chin. Now Chrissy is in full on seduce the guard mode. She is trying to trick him into untying her.

She tells him “being all tied up like this really has me all hot and bothered. But just imagine how much more fun we can have if you untie me.” Before Chrissy can say another word, the guard reverse grip hand gags her and starts feeling her up. He tells her “last time you were free you kneed me in the balls and smashed a bottle over my head. How can I trust you?” Chrissy tells him to “come closer and I’ll tell you.” The guard leans over for a kiss and Chrissy kisses him on the mouth. The lecherous henchman is initially pretty pleased he got a kiss. But then he begins staggering and exclaims “what did you do to me!!!???” Chrissy giggles and says “Oops. I forgot to tell you. My lipstick has a special formula that only paralyzes men. Soon you’ll be out and I’ll get myself free. You’ll wake up with one terrible headache in a few hours and I’ll be long gone.” With his last conscious effort, the guard manages to regag Chrissy, then he passes out on the floor.

Chrissy now flexes and bows her body loosening the ropes, grunting and mmpph-ing as she attempts her escape. After a few minutes of struggling she finally she pulls the rope free that pinned her arms overhead. Her wrists are still tied, but she knows the rest will be a breeze. She sits up and pulls that horribly tight gag free. Then she leans over and mocks the guard calling him a “sucka!” 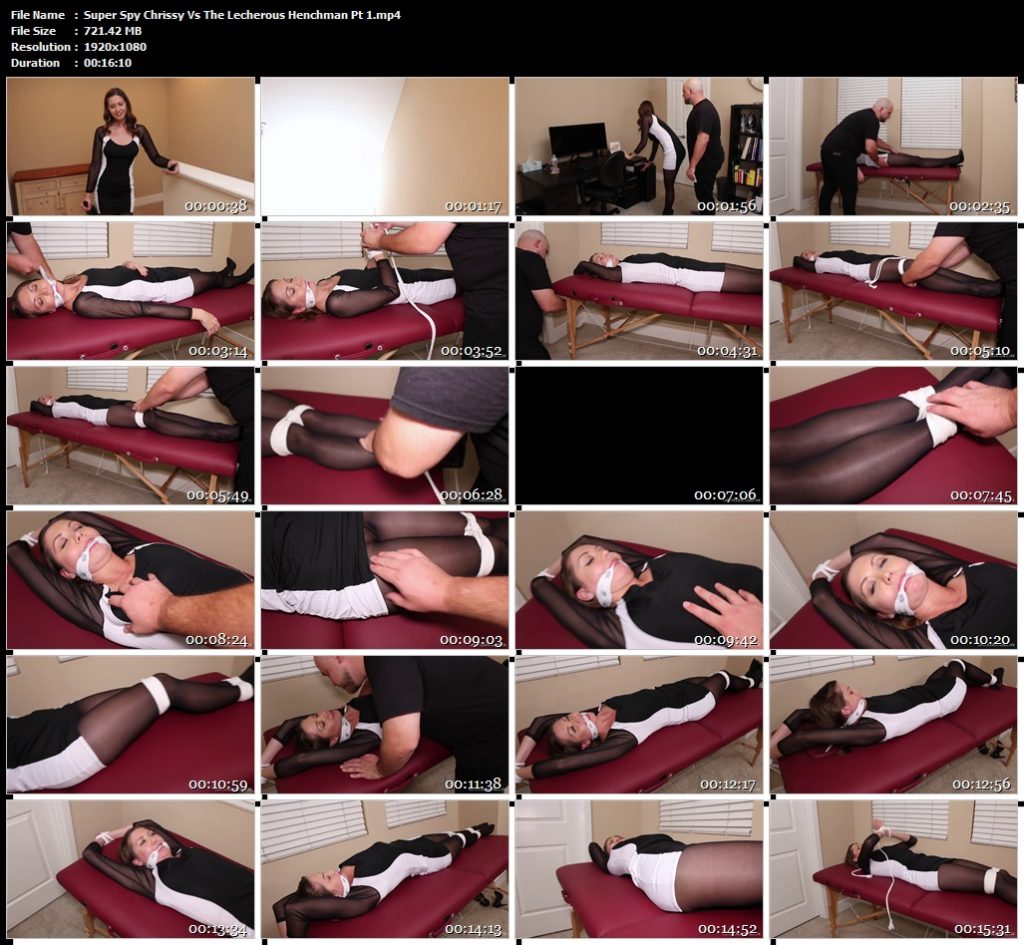