After returning to Nyxon and untying her from the chair, the man trips her dress off. Now in only her bra, panty girdle and stocking, he drags her to another part of the room. There he makes her take off her bra to expose her big boobs and then re-ties her hands in front of her. Then the man removes the gag. But before Nyxon can say much, he stuffs another pair of panties in her mouth and tapes her up again. Nyxon is then left alone again. This time with her hands tied to her ankles so she cannot reach up and pull the gag off. But this is only for a short while as the man laters returns. Using more rope, he ties Nyxon’s elbows together and then ties her in a strict ball. Finally before he leaves her again, he puts her on her knees with her panty girdled rear in the air. There he ties her to the wood framing of the basement room. Now Nyxon can hardly move and as she kneels there, she realizes that bent over like this, it wouldn’t take much effort by the man to pull the girdle down and do what ever he wants to her. 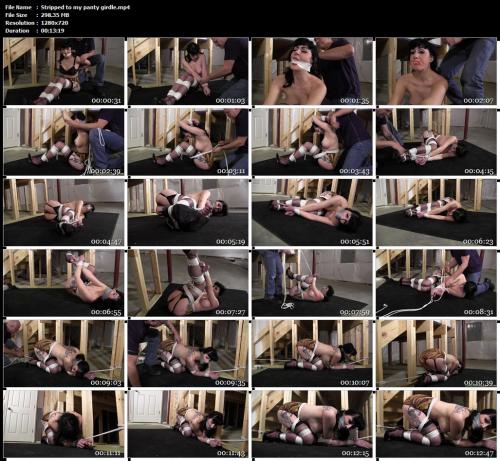