Olivia liked to tie herself up and have her boyfriend come over to find her helpless. Today, she thought her step dad was going to be gone for the whole weekend. So she called her boyfriend and told him to come over later. She told him that she would be bound and gagged for him to find her and have his way with her. But soon after she had herself hogtied and ball gagged, the door opened and in walked her step dad to find her like this. Apparently, his flight got cancelled and he would be delayed in his travels. When he removed the ball gag and asked Olivia to explain. She admitted that she tied herself up because she loved the feeling of being helpless and taken advantage of. So her step dad decided to have a little fun with her. First he put the gag back in her mouth. Then he tied her so she could not escape. After leaving to struggle bound and gagged for some time, he changed the gag by stuffing and tying a pair of panties in her mouth. He then left her like this as he left to catch a later flight. 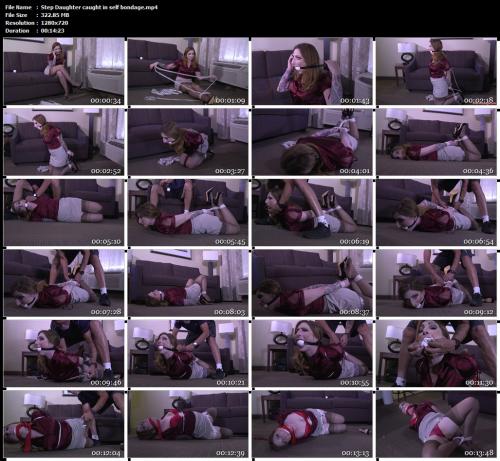 Dad! They have the babysitter hogtied and gagged! – Olivia Rose – Girl Next Door Bondage

Waiting for mom and dad to get home-He kept me taped and gagged in my pajamas!

Before I could say another word, he stuffed and taped two pair of panties in my mouth!