Chrissy Marie has really been asking for it walking home every afternoon in her tiny school uniform which she has obviously outgrown. This has caused her to acquire a rather sadistic stalker who is waiting for the right time to make his move. Today she was driving him insane as he watched her walk down the street in her short skirt and high heels, her tempting curves spilling out all over her place and her white panties flashing him every time the wind blew. Chrissy had a long hard day at school and is very tired, so when she gets home she yawning uncontrollably and collapses onto the couch, instantly falling asleep. Her stalker will be pleased to find she is a very deep sleeper and it will be hard to wake her when she is so exhausted. He breaks in, prepared for a struggle, to find Chrissy peacefully snoring on the couch. He starts to touch her legs and remove her heels and socks, getting a nice long sniff of her socks she has been wearing all day long. He is amazed that she isn’t waking up yet. He manages to tie her ankles with rope, but when he goes to tie her wrists he accidentally drops her hand from up high and it wakes her up. She is frightened by the strange man standing over her as he panics and tells her to go back to sleep. Unsure what to do, he quickly puts his hand around her neck and chokes as Chrissy struggles, but she can’t fight his strength and her eyes flutter and roll back as he knocks her back out. He finishes tying up her limp wrists and thighs, then decides to wait until she wakes up to finish the rest, it will be more fun that way!

Hours later Chrissy awakens and in her groggy state starts to remember what happened and realizes that she is bound with rope! She starts struggling hard and calling for help. Hearing her from the other room, her stalker rushes back to solve that problem. He saved her knee high socks just for this occasion! He stuffs her mouth with one and ties the other one tightly between her teeth and around her head! She can’t believe what is going on and is getting really frustrated at the situation. He proceeds to viciously hog tie her crossed wrists to her ankles, making sure she can’t go anywhere. Chrissy can barely move in the painfully tight hogtie. He pulls her tits out of her blouse, explaining to her how he has been watching her for some time. He pulls down her white cotton panties and fondles her for a while and she struggles and mmppphs through her gag, oh how he loves those gag sounds! Suddenly he decides he should leave quickly before he gets caught! Chrissy begs that he not leave her tied up and gagged but he does anyway! Poor humiliated schoolgirl is literally stuck and has no chance of escape, barely able to move at all in her strict ropes, and surely no one will be able to hear her either! She struggles as hard as she can but she knows she won’t be able to get out as her frustrated grunts change to helpless whimpers and she hopes that someone finds her soon! 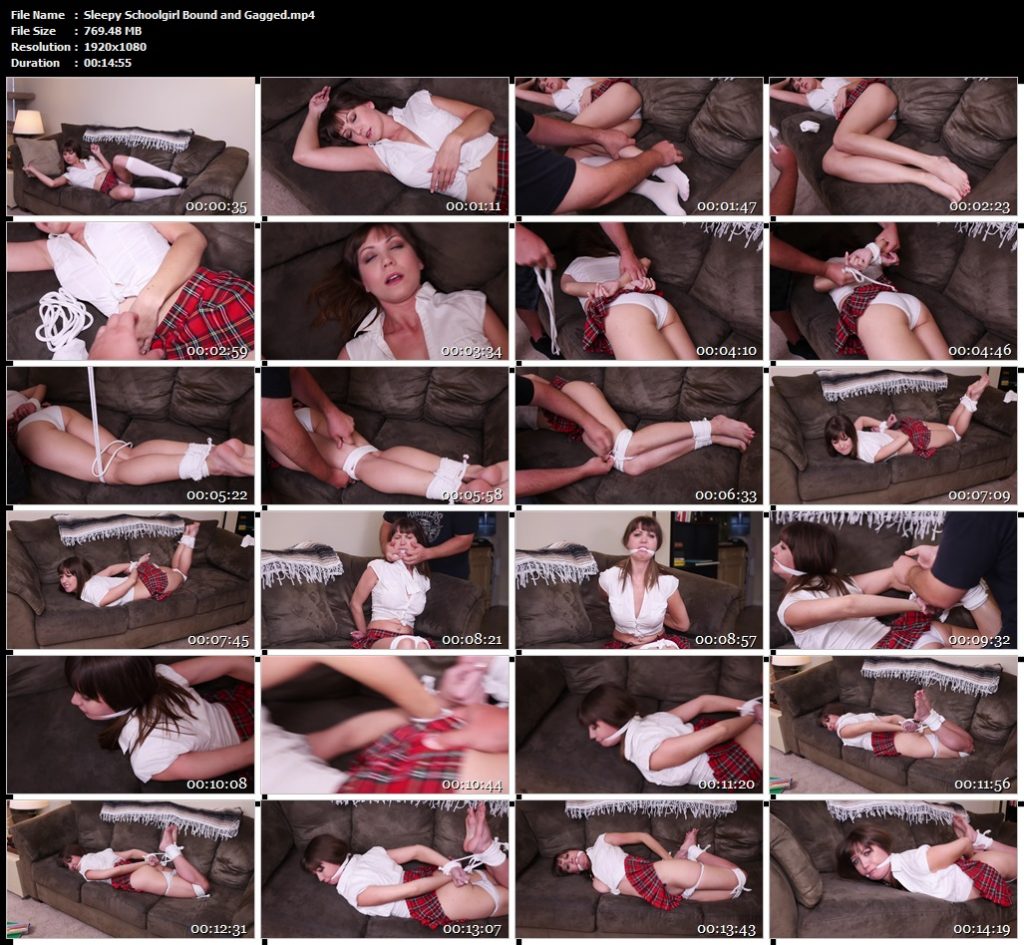