Caroline and her friend have a routine. They pick out unsuspecting men. Caroline steals his room key and while the friend keeps him occupied, Caroline goes up to his room to rip him off. But today, the chose the wrong guy. Because when Caroline gets into his room, she discovers he is involved very illegal activity. Caroline realizes that she needs to get out of his room. But her friend has failed to do her part to keep the man occupied. Because a short time later, he comes up to the room and catches Caroline. Knowing she has seen too much, he cannot let her get away. So, he ties her up with rope. Then to keep her quiet, he stuffs a sock in her mouth and ties a rag over her lips to gag her. Bent over the counter with her curvy ass in the air, Caroline struggles to get loose. But her chance to hop away is taken away when the man puts her on a chair and ties her down. As an added effect to humiliate her, he ties a crotch rope between her spread legs. Knowing the friend is still in the bar area, the man decides he needs to go back downstairs and deal with her too. But before he leaves to do this, he re-gags Caroline by stuffing panties in her mouth and tying a tight cleave gag between her teeth. He also pulls her blouse open and her bra down to expose her boobs. 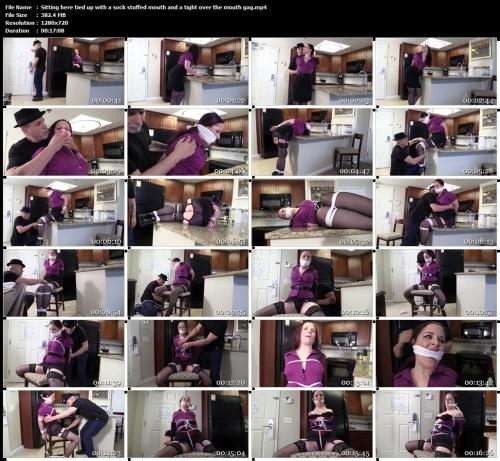