Ivan’s been called into the office by his vivacious, curvy blonde boss. This can’t be good…even if the blonde is hot, she was his boss and a complete bitch! She tells Ivan he is fired, and Ivan tells her she will ‘regret her decision’. Ivan leaves the office, but soon walks back in. He puts his hand over her mouth. Shutters is placed on her belly and tightly bound. Her wrists are tied first. The struggling vixen calls for help. Ivan isn’t deterred. He goes for her knees next. The ropes are tied tightly on her sexy, long legs. Shutters begs for some mercy, but gets none. Instead, her ankles are tightly bound. The ropes just keep piling on tighter and tighter. He cinches the ropes to her heels and sits the stubborn, blonde bitch up. He had enough of her. He shoves a rag into her mouth and tapes it in place. Ivan fondles her large breasts, and wanting more, he unbuttons her button down dress shirt. She looked great in it, but even better with the buttons undone giving him a better look. The rich bitch isn’t so mighty now. A tight chest harness is added to Shutters’ getup. Which pushes those large breasts out even further. She is pushed back down on the desk so Ivan can tighten things up even further. She moans and mmmpppphhhss loudly into the gag that was placed deep within her large mouth. Ivan tells his ex boss he is going to ‘leave her struggle for awhile then he will be back for her so they can have some kinky fun…together’. Poor Shutters. All she can do is struggle and cry out in pain. Ivan comes back for her and lifts then carries the scared damsel up and out of the room. Looks like it doesn’t pay to be a bitch. 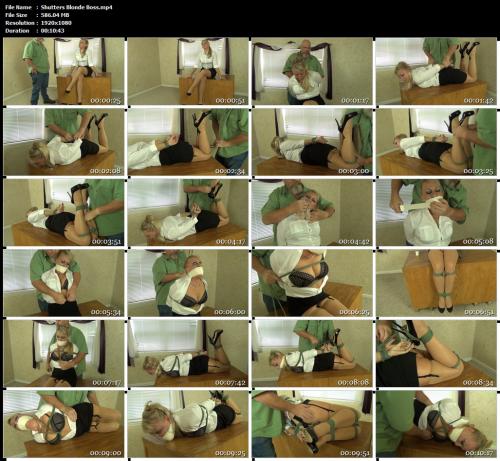