Juliette searches in the woods after mushrooms. She has a basket in her hand and wears warm boots. Sometimes she holds still and listens because she thought she hears some noise. But there is nobody so she goes the way through the forest. After a while she meets a man who says friendly ”Good Morning” to her and he passes her. That was his plan. Juliette has no eyes in her back and can’t see that the man stops and comes back and suddenly he overpowers her and he cuffs her wrists behind her back and ties a ropes around her neck. He drags the rope and Juliette has to follow him to a tree. There he ties her hands above her head to the tree. He also ties her ankles to the tree. He pulls up her shirt and see her sweet tits. Juliette moans a lot and begs him to let her go. Thats why he takes her scarf and gags her mouth. Now there is a little bit silence. He touches her but Juliette moves to much so he takes more ropes and ties also her upperbody and neck to the tree.

He found a new slavegirl in the woods and he wants to show her that he don’t accept disobedience. So he takes a whip and whips her tits, stomach and upperbody. Juliette moans a lot and after a long while of whipping he has enough. He pulls down her skirt and slip and unties her right ankle. But only to pull up the leg with the rope. He secures the rope to the tree and now Juliettes pussy is wide open. He touches and massages her crotch area. He takes out his dick and fucks her hard while she stand on the tree. With every stroke her back and ass bangs on the tree. It hurts but the guy has no mercy. After some minutes hard fucking he comes in her pussy. He unties her and allows her to take on the skirt. The rope around her neck is now a leash. The guy leads her through the forest to her new home. There she has to take off her clothes. She gets a slavecollar and a penis gag and he cuffs her hands again. He is tired that’s why she has to go in a cage and stay the night there. 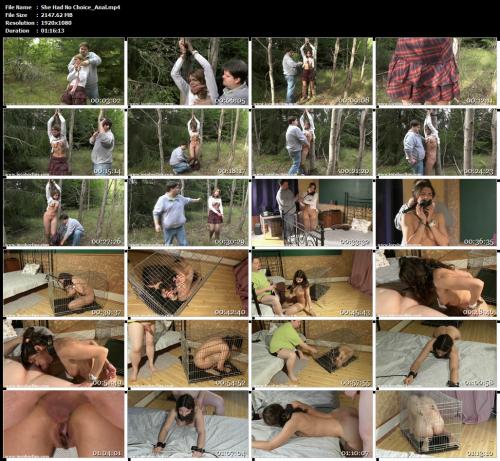