He never thought it would have been so easy to capture his very own school girl! She was exactly like what he pictured in his fantasies, with her short plaid skirt, white cotton panties, neck tie and even pigtails! To top it off she had pretty blue eyes and nice long legs. He had to have her, so he waited until just the right day when she was walking home late all by herself. He surprised her and knocked her out before throwing her in his trunk. Back at his place, he cradle carries her inside while she is still out and throws her floppy body onto the couch. He hopes she cooperates when she wakes up, after all he doesn’t really want to hurt her. While he is waiting he removes her heels and socks, he prefers his girls barefoot and goes to start unbuttoning her blouse for a little sneak peak. Just as he gets her tie off she starts to stir. At first she is quite confused, asking where she is as she tries to sit up. He threatens her and tells her not to do anything stupid. That should keep her from screaming, but she keeps asking questions and insisting that she didn’t do anything so he knows he’s going to need to keep this girl quiet until he get her secured. He orders her to stand up and take off her panties. She hesitates at first but he threatens her again and she obeys. He tells her to stuff them in her mouth and she begs him not to make her, there is no way she can fit them in! But he forces her to pack them in until her mouth is bursting full of panties. Then he takes her tie and wraps it around her head twice, tightly cleave gagging her. That should do it! Now all we hear is muffled mmppphs and scared whimpers from the poor schoolgirl. Since there is no way she is just going to let him shackle her up at this point, he will have to put her back out again to make it less of a struggle. He is prepared with a syringe that will do just that, as he injects it into her ass cheek as we see the worried look on her unsuspecting face. She soon starts to stumble and collapses onto the couch. Her eyes flutter and roll as she falls back into a deep sleep. Now back to what he was doing….

He opens her blouse and bra and reveals her plump, perky tits, groping and fondling her body, amazed at how perfect his new pet schoolgirl is. He lifts her up and cradles her as he starts to flail her around a bit and sucks on her tit, just as tasty as he expected. Then he remembers he needs to get her a collar to make it official! He checks her eyes to make sure she is really out, then carries her over to her new cage where he shackles her ankles to it and handcuffs her hands around her thighs. He leaves her shackles and locked in the cage while he goes to get her a collar and some more toys. She wakes up and realizes her predicament and starts to panic! Gagging on the panties in her mouth she struggles to get out her uncomfortable position, but the shackles are attached to the cage and there is no way she is going anywhere! After some time she manages to slide her hands under her butt, but that doesn’t prove to be anymore helpful. The keys are no where in sight and she can’t even get the cage door open. She continues to struggle helplessly, trying to remove the pressure of the shackles bound tightly to her ankles. All she wants is to go home, what she doesn’t know yet is this is her new home now. After a long torturous struggle she starts to give up just in time for her new owner to return home. He starts telling her about his plans for her as he open the door to her cage and she begs and pleads through her gag in fear! 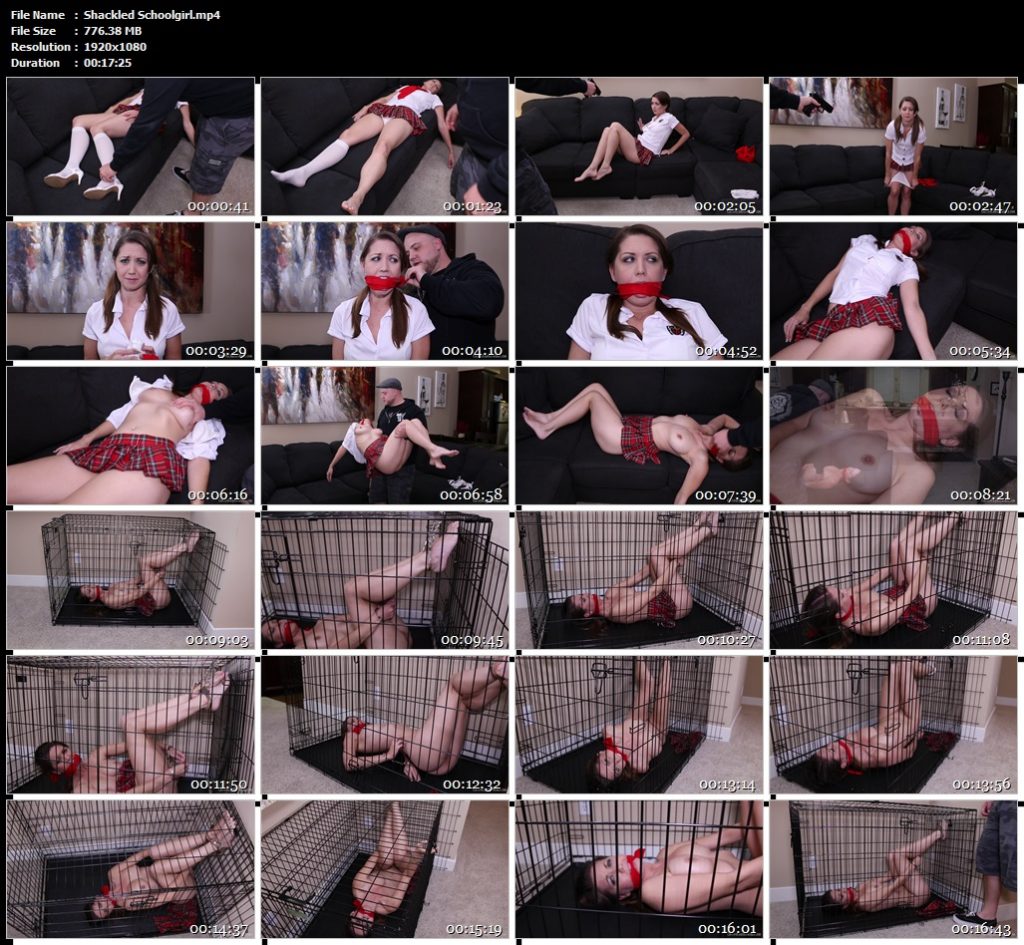