Chrissy is hard at work when her boss comes into her office and starts scolding her about leaving her desk when she wasn’t supposed to. She insists she only left once because she really needed to use the restroom, but she can tell he doesn’t like her excuse and is still quite angry! He tells her he has something for her to make sure she won’t be leaving her desk at all for the rest of the day. He takes out a roll of duct tape and starts taping her body to her rolling chair so that she can barely move! He leaves her there all taped up but just lose enough so that she can still reach her keyboard and keep working for the remaining 6 hours of her shift! Chrissy can’t believe her boss did this to her, but she needs the job so bad that she takes her punishment like a good girl, continuing to work while humiliatingly taped to her desk chair. The duct tape will surely ruin her expensive satin blouse and silky pantyhose, but she supposes this is a small price to pay for being such a well paid secretary!

After a long day of working all taped up she is counting the seconds for her boss to return and finally let her go. Unfortunately for Chrissy her boss has had the entire day to think it over and now has more plans for her punishment. When he comes back and starts taping her legs and ankles with more duct tape she begs and pleads with him that she has already learned her lesson, but he insists she needs more discipline! He gags her with a few strips of duct tape then tightly binds her wrists to the arms of the chair with even more tape! He unbuttons her blouse to reveal her sheer purple bra and squeezes her tits as she helplessly squirms and mmppphhss through her tapegag. She is left struggling bound to her chair, knowing that no one will come looking for her so she has to try her best to escape!

Chrissy rolls around the room taped tightly to her chair, struggling to get attention through the blinds or find something in the drawers that could possibly cut her loose. She wonders why she doesn’t have a pair of scissors in her office, that would be really useful at the moment! She struggles hard against the tape but she is secured so tightly to the chair that she soon realizes there is no chance of escape and she will be forced to endure her bound discipline the entire night! After many hours of struggling in vain her boss returns in the wee hours of the morning. The rest of the office won’t be arriving for a couple hours yet. He tells her he had one other thing planned for her, and she looks at him fearfully. He starts to cut her out of the tape and she is relieved but also worried. As soon as she removes her tape gag she tells him again she has really learned her lesson, but her desperate pleas are not enough to get her out of what’s coming next! 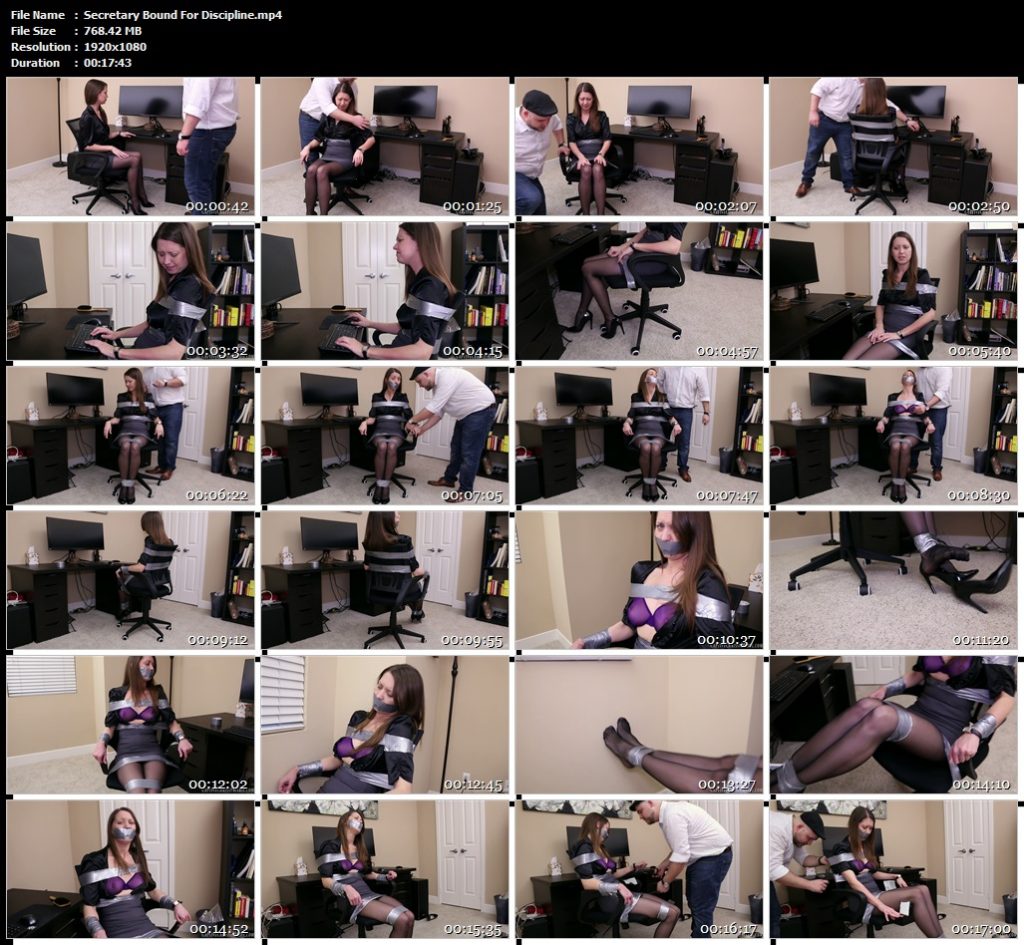