Chrissy and Lola are rival reporters who recently graduated from the same college and are now competing for the same star reporter position in town. However Chrissy knows that Lola is the better reporter and that she doesn’t stand a chance with her as the competition so she comes up with a plan to prevent Lola from making it to her interview so that she can take her place! The morning of the interview Chrissy sneaks in to Lola’s apartment while she was in the shower, and hides until the right time to make her move. Finally, Lola is sitting on the checking her phone before she has to leave and Chrissy quietly sneaks up behind her, white cloth in hand. She quickly grabs Lola and clamps her hand over her mouth and nose. The unsuspecting Lola deeply breaths in the substance and before long her eyes roll and she falls limp on the couch. Chrissy’s plan is off to a great start! She grabs her bag of rope and gets to work tying up her competition, struggling to bind her limp limbs but eventually managing to tightly secure her, just in time for her to begin waking up! When Lola notices Chrissy and realizes what she has done she gets extremely angry and struggles furiously to try and escape the tight ropes. Chrissy just laughs at the frustrated helpless girl and pulls out a long white cloth, slowly approaching her from behind and gagging her with it as she continues to bitch at her for tying her up! Chrissy’s plan is almost complete, but before she goes she has one more thing to do. Chrissy slowly pulls down the top of Lola’s dress as she squirms and mmppphhsss in protest. Then she is really outraged when she pulls her bra down too exposing her boobs! Chrissy takes some photos of the half naked tied up girl and threatens that if she ever tells anyone about what happened here then the photos will end up on the internet and she will never be able to get a decent reporting job ever again!

Chrissy notices it’s time to go before she end up late for the interview! Lola continues to struggle and gag bitch at Chrissy for stealing her job opportunity as Chrissy gathers up her things. Just as she is about to leave a masked man suddenly enters the room. Both girls look surprised and Lola is especially worried since it is her apartment and she is also helplessly bound and incapable of defending herself! The man is also very surprised, he had just planned the rob the place, but instead he walked in on two beautiful ladies playing bondage together, even better! Chrissy is frustrated that he is interfering with her plans and tells him that is not what’s going on and he needs to leave immediately. Well that wouldn’t be any fun now would it. So instead he ties her up too so that she can have some fun struggling bound and gagged alongside her girlfriend! Chrissy gets even more angry every time the robber refers to Lola as her girlfriend, and Lola is amused that Chrissy is getting the karma she deserves! The masked man binds and gags Chrissy just like she did to Lola! Lola continues to try to escape while the intruder strips Chrissy topless and gropes her. Then he notices that Lola’s thigh ropes have come loose so he helps her out by tying them tighter! Chrissy makes an attempt to hop away but he catches her and hogties both girls on the floor to keep them better secure! He goes to search for Lola’s valuables while the rival reporters are left hopelessly struggling in their hogties while angrily gag bitching at each other the entire time! 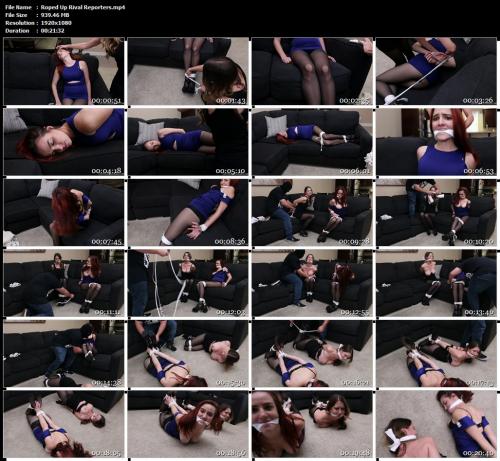