Chrissy is in her bedroom wearing a sexy red dress. She is on the phone flirting with her boyfriend and tells him that she has a special surprise for him when he comes over. Chrissy is planning to play bondage games with him and has a huge pile of white rope and a roll of microfoam tape next to her. Unknown to Chrissy, a burglar has broken into her home and is standing right behind her. She tells her boyfriend she will see him in a few hours and as soon as she hangs up the phone the burglar grabs her and hand gags her from behind. Chrissy struggles and tries to scream but she can’t break free from his grasp as the scene fades out.

Now Chrissy is tied up with her own rope. Her wrists, elbows, ankles and knees are tightly lashed together and more rope frames her breasts. Chrissy wanted her boyfriend to tie her up, not the burglar! She tries to threaten him stating that her boyfriend will be home any minute but the burglar informs her that he heard her entire conversation and knows he won’t be there for a few hours. Knowing she’s in real danger now Chrissy starts crying out for help. Not wanting the neighbors to hear the burglar decides to gag her. He stuffs a large pair of panties in Chrissy’s mouth and wraps white microfoam tape very tightly around her mouth and head. Then the burglar goes off to look for valuables and takes Chrissy’s phone with him so she can’t call for help.

Chrissy struggles in her ropes and tries to cry out for help through her gag but it’s no use. The ropes are too tight and no one could possibly hear her through her gag. After a few minutes Chrissy decides to try and hop away but she doesn’t get far before the burglar comes back and catches her. He throws her back on the bed and puts her in a tight crotch rope and hogtie. No chance of her hopping away now! The burglar thanks Chrissy for making his job easy and leaves her hogtied on her bed. With the burglar gone all Chrissy can do is helplessly struggle and wait until her boyfriend arrives to save her. 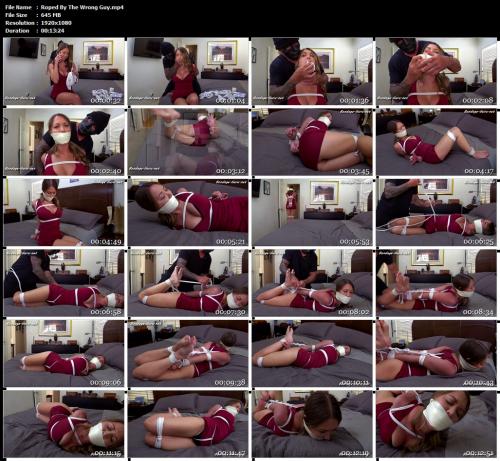