Rogue is in trouble. She’s bound upright, her wrists lashed behind her back and a harness gag strapped into her mouth and anchored above her head, keeping her upright. The gag is already making her drool, and she wrenches her bound hands up in an effort to remove it. The buckles remain tantalizingly out of reach, her fingers brushing against them but unable to gain any purchase. She’s already worried about what is about to happen, and she knows that without removing the gag that keeps her whimpers muffled and quiet, escape is hopeless. How right she is! Her tormentor enters and ties a very tight crotch rope on her, anchoring her hands behind her through the rope. Her wrists now useless, he proceeds to add to her plight. Slowly and methodically, he adds band after band of excruciatingly tight rope all the way down her lower body! With her legs, knees, things and ankles fused together, keeping her balance has suddenly become far trickier, and she struggles hard to remain upright. Her assailant begins to work on her upper body now, cinching her elbows together and lashing her arms to her body with several more coils of rope. The tightness is almost unbearable around her shoulders and elbows and she’s finding breathing to be a painful ordeal. She’s left alone for a bit to endure her ropes, then she’s lowered to the floor and dragged across the carpet, yelping as she is tugged into position. Unable to see what the man is doing to her, she’s VERY surprised and distressed when her legs are hoisted into to the air, pulling her entire lower body off the ground and placing all her weight on her already aching chest. for the final touch, her harness gag is tied off and pulled back sharply, her head and neck undergoing a terrible stretch and strain, as she is left to drool and moan and wiggle in her bonds! 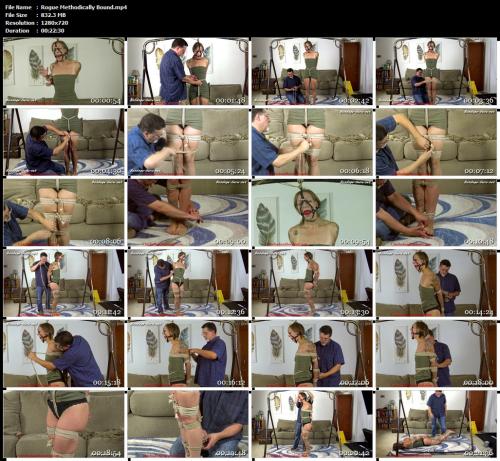