While house-sitting for her sister, Rachel found herself captured by an intruder who was hell bent on finding her sister. Unfortunately, Rachel couldn’t convince him he had the wrong girl! Begging, pleading and trying her best to explain was useless thanks to the hand clamped over her mouth, and every time he removed it, she was silenced again before she could explain! Her chances of convincing the stranger disappeared once he stuffed her mouth with cloth and wrapped bandages tightly in place to keep her good and silent! Left alone as the stranger searched the house, Rachel struggled in the ropes that held her tightly bound, but escape was impossible. Still, she never gave up, squirming in her bonds and grunting into her gagged mouth, knowing she had to escape before he returned! Unfortunately, when he did come back, he was carrying some very strange equipment! The cloth that filled her mouth was removed and a horrid leather contraption stuffed in it’s place, her mouth filled by a hard, black ball and straps encircling her entire head, locking everything in place! In an effort to help “convince” her to be more cooperative, he tied her even more strictly, her elbows lashed together and her wrists pulled up into the small of her back! Her hands anchored in place, locked tight by ropes pulling on her crotch and shoulders, her upper body was completely useless to her, and she could not prevent her crazed assailant from opening her blouse and pulling off her skirt! Left alone once more, she thrashed about uselessly on the floor, her mobility hampered by her elbows which jutted out at a severe angle, preventing her from rolling from side to side. When her captor once again returned, she found her legs pulled back tightly into a severe hogtie and anchored to the harness gag, pulling her head and neck back and completely eliminating any prayer of escape. Left in agony, she could only wonder what would happen to her now! 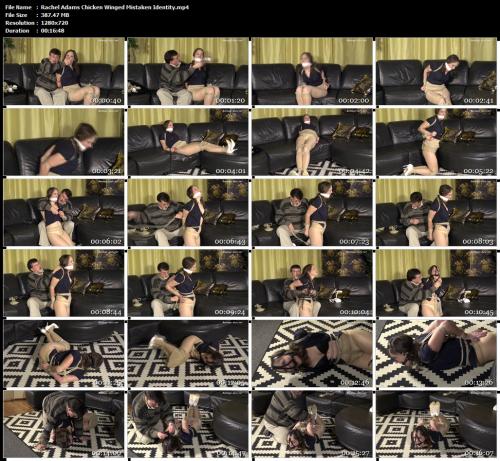