Chrissy Marie is a part time pet sitter who has been watching over a new client’s pet for the past week while he was out of town. Or so she thought. Turns out he never went out of town and has been spying on her when she would come over to feed his pet! Today is supposed to be her last day which means it’s his last chance to make a move. Even though he won’t be needing her pet sitting services anymore, he could definitely use her for some other services!

Chrissy walks in unsuspectingly to do her job but this time she hears him come down the stairs. She is surprised and says she thought he wasn’t due back yet. He tells her the trip ended early unexpectedly. She ensures him it’s no problem and she will be going now because he can obviously won’t be needing her, but as she turns to walk away he grabs her and handgags her! She struggles hard but can’t break free from his grasp as he drags her back into the living room. He proceeds to tie her wrists behind her back with rope as she begs him to stop or at least for some sort of explanation! Well of course he doesn’t stop tying her up, but he does tell her that he has been watching her all week and that she is a very sexy girl. Chrissy is extremely creeped out by this and decides her only hope is to try to call for help. Too bad for her he is prepared to keep her quiet and pulls out a large cloth to stuff her mouth with! When she sees it she refuses to open her mouth, but he has his ways! Once her mouth is packed full he takes a cleave gag and pulls it between her teeth, tightly knotting it behind her head. Chrissy’s protests are now nothing but helpless mmmpphhs and whimpers. He continues to add more rope over her cute ugg boots to bind her ankles together. A chest harness is added and he must admit he loves the way she looks bound and gagged. He also loves how hot she looks in those skinny jeans, but he thinks she will look even better out of them! So he pulls them down to her bound to get a look at her tight ass in her little white thong. He tells her that what he really wanted was a special new pet and she is a perfect fit!

He leaves her to go prepare her crate, telling her that if she is a good girl while he is gone, maybe she will get a treat! Chrissy can’t even believe this is happening to her! Degraded and distressed she desperately struggles to escape from the tight ropes but with no luck! She hopelessly struggles in her perilous predicament until he returns for her. She begs him through her gag to please let her go! Instead he grabs her by her bound booted feet and drags her out of the room with her squirming and squealing all the way! 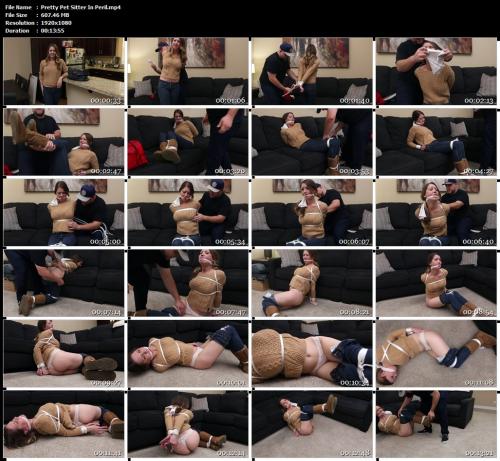