Nyxon was dancing at a local strip club, when one night after he shift she was taken & thrown into the back of a van. The scene opens up with Nyxon being forced into a room in a warehouse, and her arms tied in a tight reverse prayer behind her back. She’s pushed onto a table, and the man ties her ankles & then ties her into a tight hogtie. As he’s shoving a ballgag into her mouth, he tells her that the strip she worked at was just a front, and that girls were taken from there all of the time, and then sold as sex slaves to the highest bidder. Nyxon struggles & protests, but the man’s ropes are just too tight for her. The man gropes her huge tits, and even pulls them out of her bra, exposing her. He tells her that since she’s so feisty, that maybe he’ll wait a few days to ship her off, and have his men come in to “break her in”. The man then walks away to call the other guys, leaving Nyxon to struggle helplessly on the table. 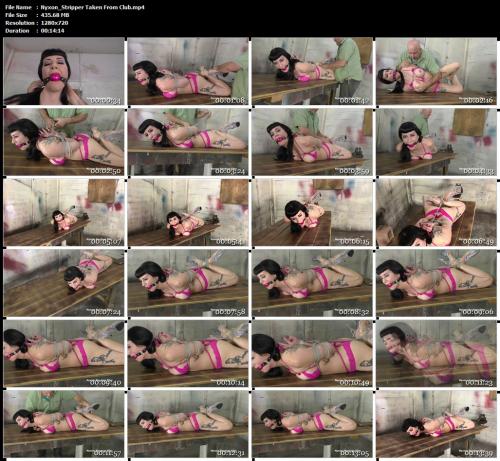