Nyxon has answered an online ad for a “Magician’s Assistant”, and arrives at the magician’s house for her audition. He quickly invites her inside where she reveals her assistant’s costume that he requested that she wear. He gives her a once over, and approves. He briefly tells her that he has a very popular Vegas act, and that for her audition today, she’ll have to perform one of his tricks & get out of a straitjacket within a certain amount of time. Confused, Nyxon asks him if he’s going to tell her the secrets of the trick, but the magician just smiles & walks out of the room. A bewildered Nyxon begins to struggle in the straitjacket to try & free herself, but it’s nearly impossible. After a few minutes, the magician comes back & is pretty disappointed in Nyxon’s performance. He adds more leather straps to her, frogtying her legs & then ballgagging her. He tells her that she didn’t get the job, but that he’s going to let her struggle around on his floor a while longer while he conducts some other auditions. 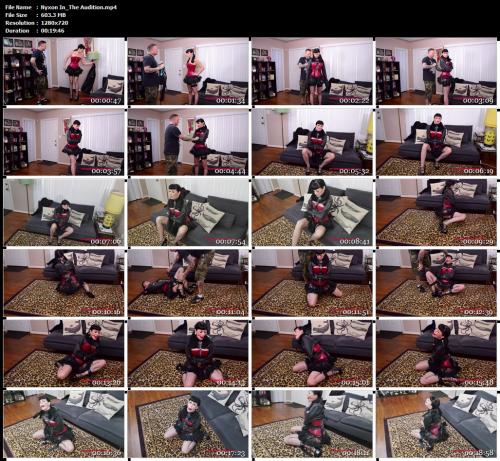