Chrissy is dressed for a modeling interview wearing a short skirt, sheer top, thigh high nylons, bra & panties and high heels. She is brought into a room and asked to take a seat on the chair. He asks her to begin by showing him some sexy modeling poses on the chair, including crossing her legs and sitting sideways on the chair leaning her head back to expose her sexy neck. The guy then asks her to please take off her clothes. She tells him she doesn’t do nudity and when he insists it’s a requirement she tells him this is not the job for her and starts to leave. As she gets up and heads for the door he comes up behind her and puts his belt around her neck, pulling her head back and forcing her to sit back down in the chair. He tells her she will do as she is told and she begs and pleads for him to stop and take the belt off her neck! She struggles but her fear eventually makes her gives in and tell him “I will do whatever you want just please don’t hurt me!” So he takes the belt off her neck and orders her to stand up and take her top and bra off. He then tells her to bend over the chair with her ass out. He pulls up her skirt and pulls down her panties then proceeds to give her a spanking, telling her this is what happens to models who don’t listen! After her ass is nice and red she is ordered to stand up again and place her hands behind her back. He grabs some rope and ties her elbows together and binds her wrists. Then he has her sit back in the chair and he secures her bound wrists to the back of the lower chair frame. Then he grabs the belt again and she begs him “please not the belt again!”. The belt is fastened around her neck and he uses it as a torture tool occasionally pulling her head back, mildly choking her and keeping her compliant. He orders her to keep her head back while her ties her ankles to the chair and up off the floor keeping her legs spread. Next she is ballgagged and by now she has learned that he prefers her head back exposing her neck so she continues to comply. For the rest of the scene she is tortured by being mildly choked by the neck belt and groped. He also pinches and pulls her nipples and slaps her thighs. He even gives her a good hard flogging to her breasts and pussy. All the discipline that a bad model needs to set her straight and get her in the right mindset! Finally he decides to give her some pleasure. He uses the hitachi vibrator, first teasing her with it before pressing it firmly up against her shaved pussy. After she cums hard he tells her the photo session can begin now. She looks at him with trepidation not knowing what he will demand of her next! 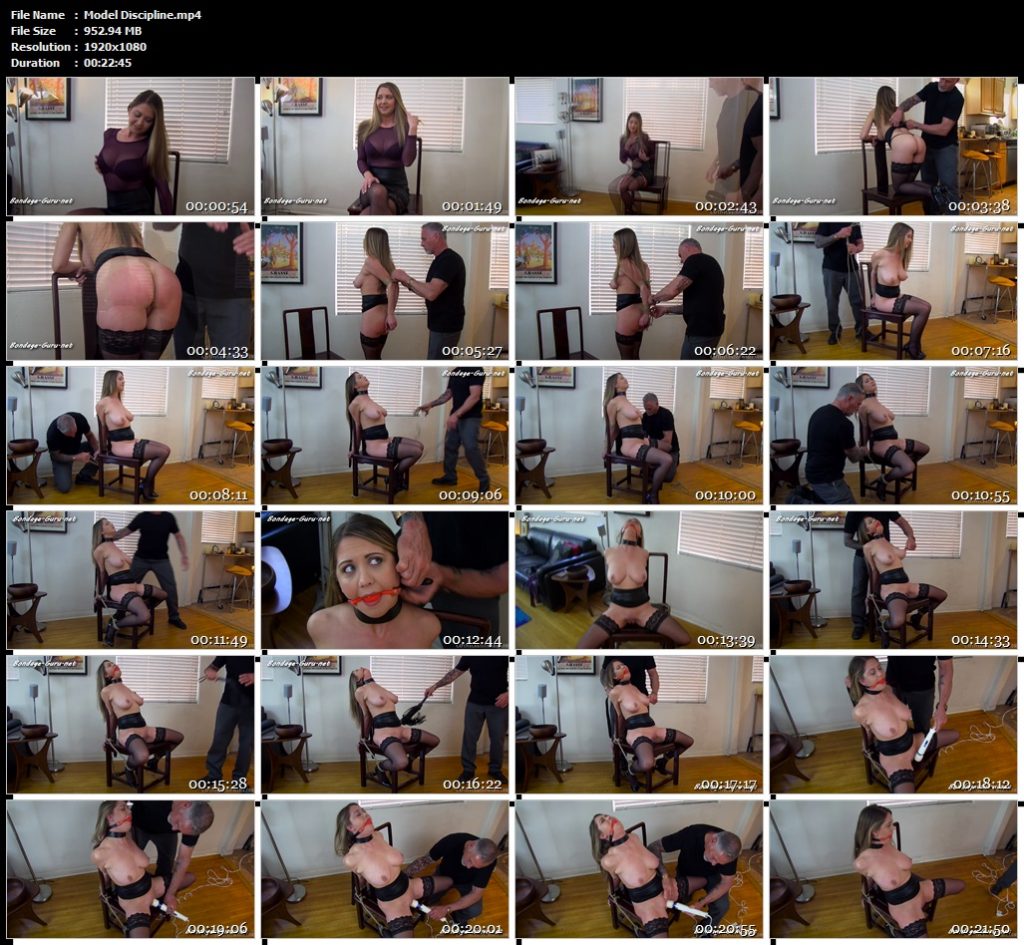