Chrissy has been captured from her sorority costume party by a rival fraternity costume party. Her captor dressed up to blend in, grabbed Chrissy, and took her back to their house. The door is opened and in walks Chrissy being guided by her masked captor. A red cloak covers Chrissy so you can’t really see what she is wearing underneath just yet. The hood is drawn up but you can see that Chrissy is wearing a scarf over her mouth and nose. Chrissy is scared and compliant to his commands, for the moment at least.

Once inside her captor throws her hood back and tells Chrissy that he is from the rival fraternity and that she is the victim of their prank. Knowing that her life isn’t in danger any longer she becomes furious and starts angrily protesting and demanding to be let go. The guy takes the scarf off her face, revealing a red ball gag in her mouth. That explains why she can’t talk. He then opens the cloak and Chrissy’s red riding hood outfit is revealed. It’s also revealed that Chrissy’s wrists and elbows are already tied behind her back with rope. He takes a moment to grope her, admiring her but also humiliating her. Chrissy protests loudly but no one can hear. The cloak is then taken off and Chrissy is forced to her knees and bound with more rope. Chrissy is angry, trying to fight it, and protesting the entire time he is tying her. First he ties a strict harness around her arms and chest. Then he binds her legs above and below her knees and secures her heels to her ankles with more rope. Finally he adds a crotch rope that gets secured to her wrists so that she pulls the crotch rope tighter as she struggles. He then forces her back onto her knees and wraps self adhesive medical tape over the ball gag. He roughly gropes her again while she is on her knees then leaves her alone.

After testing her bonds on her knees, Chrissy falls onto the floor and continues struggling, desperately trying to free herself from the tight ropes. After realizing she cannot escape the ropes on her own she looks around the room and spots a sharp object near the television. Her crotch rope excruciatingly gets tighter and tighter as she struggles her way across the room. Just as she gets close to retrieving the object her captor returns just in time to stop her. As punishment he puts Chrissy in a hogtie so she will stay put. Then he swaps her gag out and stuffs a pair of dirty panties in her mouth and puts several strips of duct tape over her mouth. Lastly he pulls Chrissy’s bra cups down to expose her breasts. After one last groping session Chrissy is left there to struggle, frustrated and humiliated that she is the bound and gagged victim of their fraternity prank! 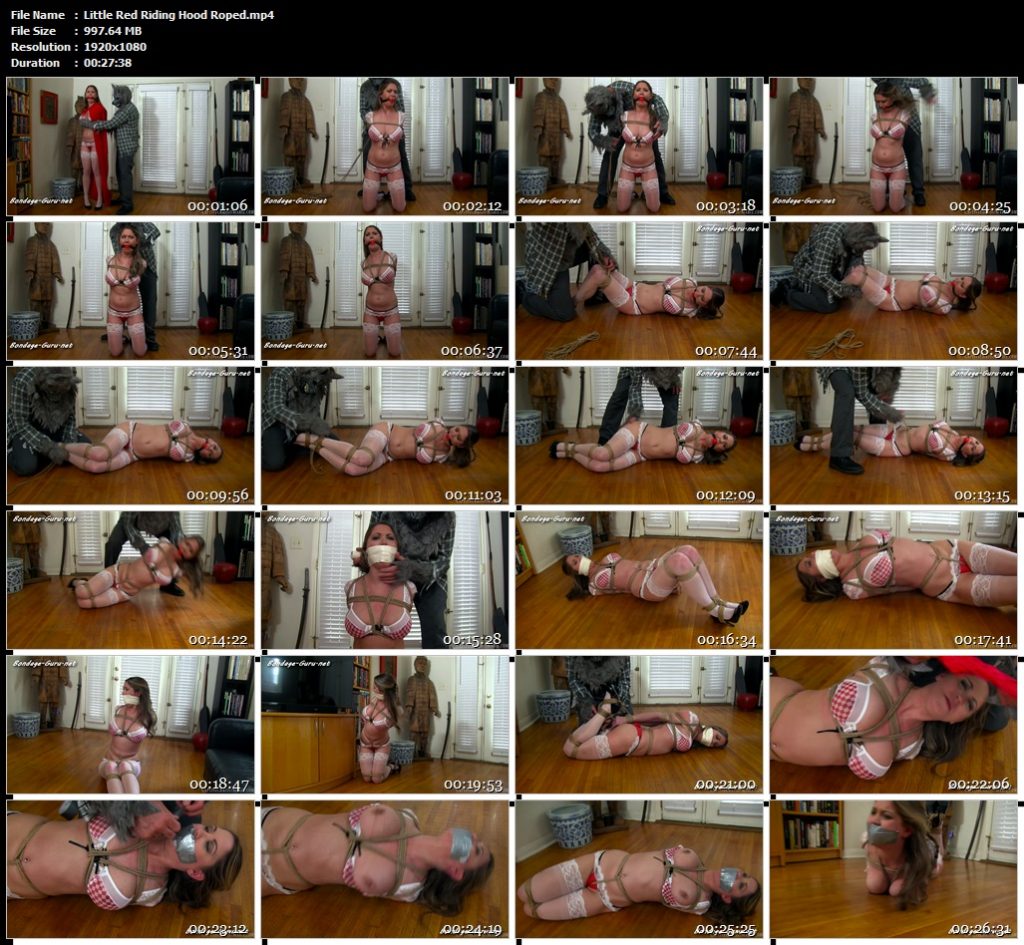