The girls had been out for cocktails and having some fun. They had talked about bondage the whole evening. Monica is a sweet little ebony girl with a smoking hottt body. But she has a dark side and wanted to try out all the things that Brenda was talking about. They come back to Brenda’s later that night. They was in the play room and Brenda was showing her the ropes. She really wanted to be tied up and try it. Brenda goes to get her old man who was a XXXX on the coach. She wakes him up and tells him that she has a sexy little ebony girl out in the play room that wants to be tied up. He jumps up to go see what he has to work with.
He walks in and see’s her and thinks wow this is going to be fun. He asked her. Now this is what you really want. She was like YES I have always wanted to do this. She says she loves the idea. He starts in right away. It wasn’t to long before she started to worry. He could see it in her face. He tells her that Brenda hasn’t told her the whole story him. This is what he does for living. She gulps and say’s well I wanted to try it. He adds and adds more rope. Things keep getting tighter and tighter. He thinks wow this girl is flexible and wanted to know just how far to push it. Push he does. Monica finds herself in one of the tightest hogties he had ever done to date.

Note: I Just wanted to give props to Monica. She was here about a year ago when she first started doing bondage. We shot a little and she tried out some other producers. We kept in touch and became real good friends over the last year. We watched her progression as a bondage model and finally got her back. We shot for two days and made a bunch of clips. I can truly say she has become one of the toughest bondage models I have worked with and would put her up against anybody. Wait till you see some of the up coming clips. 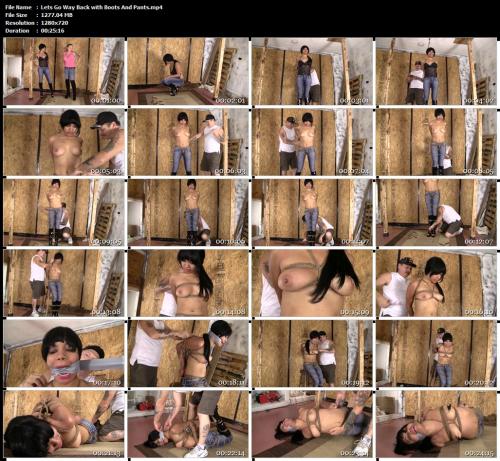 The Man Has Another One – Brendas Bound Bondage Addictions

I bet mom and dad don’t know you let men tie you up! – Monica Jade – Girl Next Door Bondage