Layla Bondage Addiction – Emy – I will make you regret your refusal

(IN ENGLISH) Emy just had a long day. Got to her room, took off her shoes when suddenly a man grabs her for behind and holds her firmlu. She tries so hard to fight it off but he is just too strong. She can’t yell, her mouth is completely covered and muffled while she slowly accepts that resisting is futile. When she wake up her hands and feet are tied. Then man is about to finish tying her up when she starts to get her senses back and tries to get attention. It is time to be gagged. The man hand gags her as she resume fighting back. That pisses the indruder off so he grabs the dirty socks she wore all day. Shoved it to her mouth and just tapes it shut. He threat her if she does not shut it up he will do something bad to her again and she knows how bad it feels so she angrily stopped. Then the man goes back to work tying her up. Now adding a tight toe-tie and more ropes/tape to her body. This girl is still very feisty and still manages to make enough sound that the man gets even more pissed off. So he reinforce the gag, stuff it again and seal her lips with clear pvc tape. He does this with many strips of tape until the woman just loses hope of talking again. Now scared, she gets finished being tied up and gagged. Thrown into the floor and gets hogtied. The man now explains why he is doing this. He has been hired to punish and humiliate her so bad. The man who thought all of this is named Miguel. A student in school where he saw in one of the events but she ignored him and said “I am too hot for you boy”. Revenge this is! What a better way than to get the right man to do the job. Since Miguel is so into to damsel in DID bondage and got some money saved up (actually not much but just know the right person), he planned all of these and more. Now it is time to feel the humiliation. Naked bound and gagged, the man now speaks of “toe-tally” making her helpless. Muffle pretty well and all she can do is moan yet the man adds even more tape to make it even worse. He makes her hogtie tighter by tying her tied-toes/feet to her crushed together elbows. Then the man starts humiliating her by taking pictures, making fun of her bondage ordeal, tells her stories of what he does to women when he ties them up to be later sold to somewhere if not delivered to the specific customer. In this case Miguel actually wants her shipped to one of his remote location for his twisted bondage activities. Where she will be tied and gagged for more humiliation for maybe a couple days then returned to her place “toe-tally” defeated. Scare her off with words such as “pretzel hogtie”, thought her toe tie right now is twisted, just imaging when it is Miguel doing it even tighter and tying it up to her neck/hair, sucking her toes to her disgust while helplessly bound and gagged, etc. Finally he does a quick phone call to Miguel to discuss business and now it is time to ship her off. One last fight for Emy before she gets taken away, all that angry gag talk yet she is still very hopeless in the floor barely can move and with every struggle more humiliation is happening to her. She gets asked if she wants to enjoy her hogties some more before she is carried away 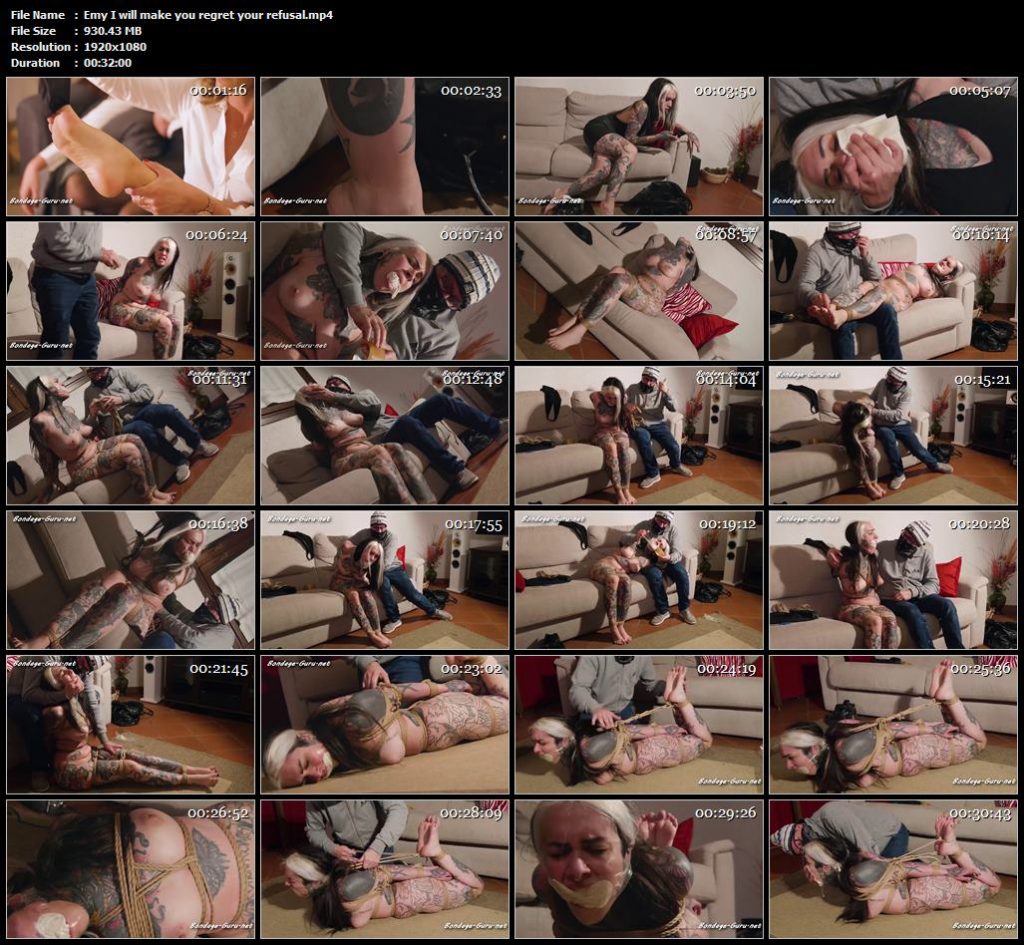 Layla Bondage Addiction – Alba – How much she can arch 1080p