Kimberly was certain that when she uncovered embezzlement within her firm she would be not only lauded as a valuable employee, she’d receive a nice bonus as a whistle blower. Unfortunately for her, the man she blew the whistle to was the mastermind of the embezzlement racket! Now lashed tightly to a chair in her own home by the corporate creep, she quickly found her mouth stuffed full of a pair of old dirty panties before being tightly cleave gagged with his neck tie! Her speech now effectively muffled, she grunts and protests angrily, defiantly refusing to tell the man who assisted her in uncovering the dirt. The man continues to “reason” with her via an escalating series of “persuasions”. He stuffs a ball gag into her mouth, delighting at the drool that pours from her mouth and humiliates the nosy girl. Her already brutally tight crotch rope is yanked savagely by the interrogator, eliciting stifled yelps, but no additional information. Escalating things a bit, he tears her blouse open, revealing her bare tits, which provide another target for torment. He pulls her nipples with a pair of pliers, clamps them with nasty clover clamps, and finally adds a heavy padlock to the chain dangling between them. She still refuses to divulge any more info, so the embezzler changes his plans. If she won’t talk to him now, she won’t talk to anyone, EVER. A heavy weight is tied to her crotch rope, burying the rope between her sex, and a bomb is tied to her chest. She is given one last chance: Talk, or have her tits (and the rest of her) blown across the country. She remains defiant though fearful, so the countdown to her demise is begun! Left alone in her predicament, the girl struggles like mad, whimpering in pain at the brutal crotch rope and the finality of her predicament. She should have been less diligent at the office!! 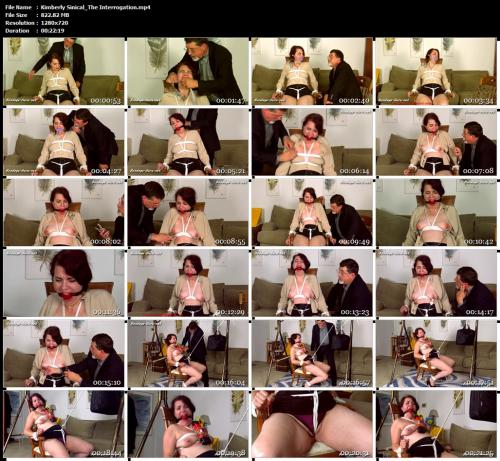